Jarmen Kell And The Forty Thieves

On The Waterfront is the third mission in the GLA campaign of Command & Conquer: Generals Zero Hour.

Now reunited once more, the GLA decided it was time to make their strength felt and capture the European continent. The USA now knew that a GLA attack was imminent and have reinforced their international bases in their response. However, before the GLA could have any possible chance of claiming Europe successfully, they needed to scuttle the US Mediterranean Fleet stationed in Crete.

Knowing that the GLA had been revitalized and reunited once more, the Americans launched a pre-emptive strike using the USS Reagan aircraft carrier against the main GLA stronghold that was nearest to their naval base.

The Raptor fighters bore down onto the GLA base without warning, thus most of the GLA base was destroyed. However there were survivors who managed to escape using the tunnel networks and rendezvous with the GLA commander some distance and islands away from the base.

The nearest power plants available were located on another island north of the Particle Cannon. The power plants were defended this time by 4 Crusader Tanks, 2 Fire Bases and a Tomahawk Missile Launcher. Luckily a Tunnel Network had already been established on the island as well as a Barracks and Palace. This time the Hijackers stole the Tomahawk and two of the Crusader Tanks, liberating the Barracks, Palace and Jarmen Kell.

Rebels also took control of the unmanned Quad Cannons and Toxin Tractors that would be useful in defending the power plants and the Particle Cannon from aerial assaults. Jarmen Kell sniped off the crew of the other Crusaders leaving Rebels for them to capture while the Tomahawk destroyed the two Firebases defending the reactors. This left the reactors ready to be captured by the GLA.

With the Particle Cannon now online the GLA could now liberate their Command Center from the occupying US forces on the small peninsula. However this meant the Americans have started trying to root out the GLA presence and made constant attempts to destroy the reactors and render the superweapon offline.

With no time to lose, the GLA commander sent in a strike team led by Jarmen Kell to assault the occupying forces at the Arms Dealer and the Command Center. Sniping out the vehicle crews and clearing out the US soldiers (liberating the Arms dealer in the process), the strike team came across a well-defended pass.

The GLA decided to call upon the Particle Cannon and destroy the defenses. After a short while the strike team took out the Patriot batteries and the small US forces there, thus taking back the command center and a Black Market that survived the pre-emptive bombings.

Assaulting the naval base

As the GLA rebuilt their stronghold, upgraded their army and reinforced their AA defenses around the reactors and Particle Cannon, the GLA adviser suggested to take out the American Supply Drop Zones to cripple their production. However the naval base was on the other island so the GLA constructed another Sneak Attack at the main airbase to allow Jarmen Kell to scout out the area.

Finding the drop zones, the GLA used the captured Particle Cannon again to destroy the drop zones and the base's power plants, so the Patriot batteries would be offline by the time the GLA attacked. Unfortunately, they could not attack immediately as US Humvees and Crusaders destroyed the Tunnel exit before the GLA strike team could enter the naval base. In the meantime the GLA built up its main force and Jarmen Kell sniped out the vehicles.

Now with the Tunnel Network exit established at the naval base for the second time, the GLA tanks entered the base and wreaked havoc. Since the docked battleships were harmless and that production was crippled with the drop zones destroyed, the GLA advanced to the aircraft carrier with little resistance. The army soon wreaked havoc again and wiped out the main US base and have finally located the aircraft carrier.

The Particle Cannon was now online and fully charged-up, so the GLA used it without hesitation and scuttled the USS Reagan. The might of the GLA had scuttled the US Mediterranean Fleet Command with the latter's own weapon. The USS Reagan was destroyed in half, some of the planes went down and the mission was successful.

The loss of the Mediterranean Fleet was a wake-up call to the USA that even their fleets were not safe from the GLA. The call for the other US fleets to reinforce the remnants of the Mediterranean fleet led to the US mainland being largely undefended. This would allow a small GLA task force to infiltrate the US West Coast to steal a new toxin weapon before the GLA could invade Europe.

In order to capture the Particle Uplink Cannon, you must eliminate the guards defending the cannon. Once you eliminate them, the Particle Cannon surrenders to you. Use the Tunnel Network to access the next island, use Hijackers to capture the Tomahawk Launchers. Then go to an abandoned GLA base, where Jarmen Kell awaits you. Use him to eliminate the defenses on the Cold Fusion Reactors to power up the cannon. Defend them with Quad Cannons as US are conducting air strikes on it.

Use the Sneak Attack ability to go the next area. Eliminate the American patrol then secure the Arms Dealer hidden with an Ambulance nearby. In order to liberate the base, you must eliminate the guards on the pass. Use the Particle Uplink Cannon to eliminate them. Then assault the base and once you've done it, build a base, attack force and defenses. Use another Sneak Attack to rout the American base down to the port.

Find the USS Reagan near the Command Center.

Make sure, you use a Sneak Attack to find these three goodies. 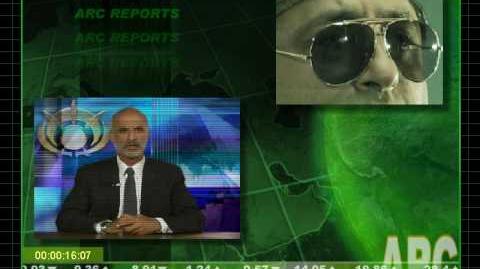 C&C Zero Hour - GLA 3 - On The Waterfront
Mission briefing
Add an image to this gallery
Retrieved from "https://cnc.fandom.com/wiki/On_The_Waterfront?oldid=246606"
Community content is available under CC-BY-SA unless otherwise noted.