The Operations Center was a Nod field structure employed during the Third Tiberium War. Its advanced communications arrays were required to support more advanced Nod structures.

The Operations Center unlocks the second tier of units and structures, andprovides a wide range of support powers. In Kane's Wrath, two upgrades are made available from the structure.

It is Nod's functional equivalent of the GDI Command Post, and the Scrin Nerve Center.

The Dozer blades, signature generators and Liquid Tiberium core power plant upgrades are provided by the Operations Center rather than the Technology lab. It also allows the purchase of the valuable Quad turrets upgrade to all turret base defenses, and the Laser fence defensive structure. Additionally, building an Operations Center unlocks the Beam cannon in the War Factory and does not require the Tech Lab, unlike in Tiberium Wars.

Certain support powers are enabled or disabled depending on the Nod faction used. The Black Hand subfaction cannot use the Cloaking field support power, but is the only Nod subfaction that has access to the Power signature scan intelligence power.

Even in Vanilla CNC3, this building is vital for building Flame Tanks, a very important unit for map control and harassment. The stealth power is useful for Scorpion Tanks, and the decoy power can help attack bikes and buggies survive more.

The importance of this building grows in Kane's Wrath with is extended capabilities, and Reckoner transports may be of use in extending the usefulness of infantry and deploying them to claim the map, especially for the Marked of Kane subfaction. Fanatics and Beam Cannons can also help close out a more aggressive match by destroying key enemy structures; as can a well timed radar jamming (against a player) while attacking a key target such as a refinery.

Flame Tanks are vitally important, therefore if the match lasts into the lategame, a redundant copy of this building should be built where possible, to avoid disruption by superpower damage or another building-snipe attack. Note that this building also unlocks the ability to build an expansion MCV at the War Factory, (making it easier to create a hidden expansion base) as well as excellent defensive options in the form of the SAM turret (and Black Hand Mantis AA drone); and the infantry Black Hand (if a War Factory is unavailable or too costly for their vehicular bretheren) as well as their alternative subfaction variant the MoKTiberium trooper. Overall, once a war factory is established, it is extraordinarily useful to have this building: construct an operations centre today! 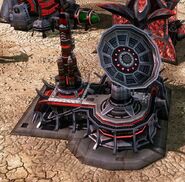 Retrieved from "https://cnc.fandom.com/wiki/Operations_center?oldid=230133"
Community content is available under CC-BY-SA unless otherwise noted.