The ORCA assault craft is a jet gunship used by the Global Defense Initiative in Renegade.

Employing a set of twin articulated jet engines as propulsion in place of the classic rotary wing, the ORCA has incredible maneuverability. These advantages came at the expense of armour, allowing the Orca to withstand only a few missile hits, provided it didn't outrun these missiles first.

The craft is armed with two weapons - a six barreled, forward mounted gatling gun (equipped with a searchlight) and a pair of Dragon TOW missile launchers on its sides, each containing nine rockets. Some later models had two forward mounted machine guns. Be advice, the gun is somewhat inoperable in game.

It's compact design allows it to fit in small passages such as canyons with ease, as well as be transported and deployed from freight trucks or specially designed resupply and transportation trucks. The fuselage dimensions limit the crew size to only a single pilot, limiting the craft's performance in combat somewhat.

While it had its drawbacks, the design proved so effective during the First Tiberium War, that it served as a basis for GDI's air forces design up to the Third Tiberium War. It was found to be particularly effective against Nod M2 Bradleys and buggies, as they had no anti aircraft capability.

This vehicle appears as a background element in single player. On "flying" maps in Renegade multiplayer, it is one of the most powerful, universal vehicles on the field.

Initially, there was a special mobile helipad to appear in the game, but it was cut.

Another ORCA lifting from a specially designed resupply/refit truck 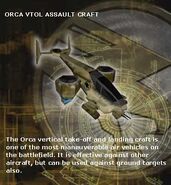 In the Renegade database

Render
Add an image to this gallery
Retrieved from "https://cnc.fandom.com/wiki/Orca_(Renegade)?oldid=217565"
Community content is available under CC-BY-SA unless otherwise noted.