These large flying craft served as a the premier flagship craft used by GDI Commanders in the time of the Second Tiberium War. One of the most legendary craft within the GDI fleet is the Kodiak that was commanded by Michael McNeil during the conflict within the Brotherhood of Nod. It served as his primary transport at the time until its unfortunate destruction at the time of the Firestorm Crisis.

Though highly effective, the OCV's proved to be very expensive to maintain and even build. As such, this ultimately led to the decision to discontinue the production as well as usage of such craft. Instead, GDI military doctrine shifted to the use of smaller and faster craft such as the Orca and Firehawk fighters. Whilst largely removed from service, Huron, one such Orca Command Vehicle, remained in use by the Third Tiberium War.

After the Scrin invasion, the GDI Council began to reconsider the use of the Orca Command Vehicles after facing the alien Planetary Assault Carrier and Devastator Warships. Thus, the Kodiak-class battlecruisers were developed and saw service by the time of the Ascension Conflict.

Orca Command Vehicles are VTOL craft that are capable of low Earth orbit. They possessed facilities to transport and support troops, including armories and medical bays. The OCV has one, major downside: it is incredibly expensive to build and maintain. As such, save for a handful of units (like the Huron), they were largely pulled from active duty and mothballed.[1]

The Kodiak (official class designation unknown) was in service during the Second Tiberium War. It was the mobile command center of commander Michael McNeil. It crashed and was considered to be unsalvageable during the Firestorm Crisis. 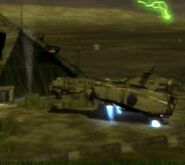 Kodiak landing at the Nod Pyramid in Cairo. 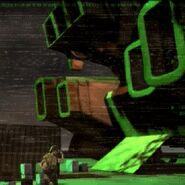 Aft cargo hatch.
Add an image to this gallery

The Great Lakes class is in service by the Third Tiberium War. It could carry four infantry platoons. Huron was an example of this type.

Retrieved from "https://cnc.fandom.com/wiki/Orca_Command_Vehicle?oldid=216469"
Community content is available under CC-BY-SA unless otherwise noted.