Comes with a free Ore truck

An Ore refinery is a facility for processing ore delivered by ore trucks. It appears in Red Alert 1.

This large, industrial building contains within itself all the necessary facilities for turning harvested ore into usable materials for construction.

With the arrival of Tiberium, Ore refinery was replaced by Tiberium refinery during First Tiberium War. In Red Alert Universe, both Allied and Soviet use a new design during Third World War, which no longer has to divert its mineral excess to a mineral silo if the storage capacity reaches its maximum limit.

It can store up to 2000 units of ore, storing additional ore required ore silos to be built. When built, it deploys a single ore truck. 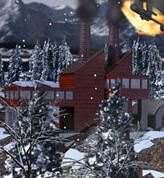 Soviet Ore Refinery near the German-Polish border, circa 1950. 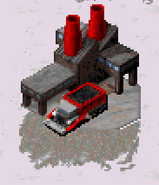 Retrieved from "https://cnc.fandom.com/wiki/Ore_refinery_(Red_Alert_1)?oldid=240055"
Community content is available under CC-BY-SA unless otherwise noted.