The Osprey is a VTOL aircraft designed for intercepting and destroying submarines and other submersible units.

Allied naval and air engineers introduced the Osprey as an alternative to depth charges used by older Destroyers.

Carried by a destroyer on a landing pad located in the rear of the ship, the Osprey carries multiple high-speed missiles, designed to penetrate the surface of the water and destroy targets below its level. The aircraft itself is extremely fast, though poorly armoured, making it vulnerable to anti-aircraft fire.

The Osprey's weapons are effective against most submerged craft and creatures, including the Typhoon Attack Submarine, the Giant Squid, the Boomer, and also rogue Dolphins. However, they are not capable of engaging in air-to-ship or air-to-ground combat, nor they are capable of attacking air units.

They have weak armor and can be shot down by Sea Scorpions, and all other anti aircraft defenses and units fairly quickly. Furthermore, if the parent destroyer is taken out, the Osprey crashes instantly. 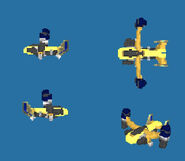 Voxel Model Render
Add an image to this gallery
Retrieved from "https://cnc.fandom.com/wiki/Osprey?oldid=223789"
Community content is available under CC-BY-SA unless otherwise noted.