Unknown (presumed to have died in the Second Tiberium War)

Oxanna Kristos was a covert operative of the Black Hand, the right hand woman of Anton Slavik, and an exceptionally skilled Nod propagandist. She features prominently in the Nod campaign of Tiberian Sun, though did not return for its Firestorm expansion pack, having presumably died in the Second Tiberium War.

Kristos served as Nod's chief propagandist. She was exceptionally skilled in manipulating the media to suit Kane's goals. Her impassioned speeches were able to inspired unparalleled furor and zeal in all members of the Brotherhood.[1]

Alongside Anton Slavik, Oxanna was one of the few upper members of the Brotherhood who would prove completely loyal and dedicated to Kane's vision throughout the long period of his absence.

Originally appearing as a reporter for the popular Nod Television program "Today's Execution", her true loyalties became evident when she rescued Anton Slavik right before he could have been executed by Hassan's (GDI collaborator's) men.

In an attempt to cover up the embarrassing story, Nod leaders proclaimed Slavik had died and was incinerated, and Kristos was said to have been accidentally killed in a tunnel collapse near her home - something Slavik morbidly joked at, remarking to her: "I hear that you're dead, lieutenant. Rest in peace." After Kane loyalists, under the command of Slavik and Oxanna, seized the TV station through which Hassan communicated to the Brotherhood followers, she appeared on air much to the surprise of her former colleague, executing him shortly afterwards on live television and broadcasting a speech calling upon all those loyal to Kane to rise up against the traitors.

The call was successful, providing Slavik with the forces he required to overthrow and seize the would-be pharaoh Hassan. Kane himself reappeared shortly after these events reached their conclusion, which would reunite the Brotherhood of Nod in full for the first time since the end of the First Tiberium War. It is unknown what happened to Oxanna during the period between the Second and Third Tiberium War. It is possible that she was killed by CABAL, or may have been targeted by Marcion because she is a Slavik loyalist.

After Hassan's execution, Slavik and Oxanna were assigned to secure a specific prize: an ancient alien warship, a Scrin Starship. Despite securing the old Nod Temple in Sarajevo, General Vega stole the ship and crashed in North America. Although Oxanna Kristos and her Commander were successful in recovering the spacecraft, the Tacitus was gone. At this time, the Black Hand encountered their new opponent: Umagon.

Oxanna and her Commander captured her and during interrogation allowed her to escape strategizing she would lead them to the Forgotten HQ.

Kane ordered Slavik to use a GDI cover to assault the Mutants in order to rally the Forgotten to their cause. Oxanna found it delightful considering her hate for "shiners". However, Lieutenant Colonel Oxanna Kristos and Slavik were captured by McNeil and Umagon falling into an elaborate trap. She and Slavik were liberated by Cabal and team commanded by a Cyborg Commando. Oxanna continued to participate in numerous victorious battles against GDI. When Nod abducted Jake McNeil, she seduced him to switch his allegiance. Inevitably, her prey fell to her. Oxanna was present for the Brotherhood's ascension when they destroyed Hammerfest.

Kristos is a selectable commander in Command & Conquer: Rivals. She can give her forces buffs via her propaganda skills.[1] 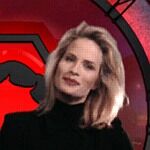 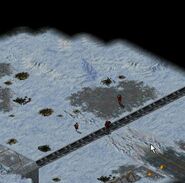 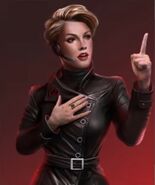 Kristos in Rivals
Add an image to this gallery

Retrieved from "https://cnc.fandom.com/wiki/Oxanna_Kristos?oldid=232480"
Community content is available under CC-BY-SA unless otherwise noted.