The Paladin Tank was an advanced American main battle tank during the War against the GLA.

Entering battlefield service as an advanced prototype, the Paladin quickly gained favor with US Generals. Early in the GLA conflict, Crusaders often made up the bulk of armored offensives, as in the attack against GLA-occupied Baghdad. In the later stages of the war, the Paladin became an increasingly common sight within US armored columns. The Paladin is the first US units to use Point Defense Laser whose technology saw use later in the conflict in units such as the Avenger.

Throughout its service in the war, the Paladin was revered for its superior survivability over the Crusader due to its tougher armour and its point defense laser, which can destroy anti-tank missiles and rockets. The laser is also surprisingly effective as a makeshift anti-infantry weapon, capable of burning enemy infantry to death.

The Paladin is a heavily armoured and well-armed main battle tank. Its main gun is more powerful than the Crusader's, and is very effective against enemy vehicles and structures, and its armour is also more durable than that of the Crusader.

However, its true strength lies in its Point Defense Laser, which can neutralize enemy missiles and rockets before they reach the tank. It can also function as an anti-personnel weapon, capable of killing enemy infantry that get too close for comfort.

Only the main US Army has access to Paladins, which is odd in the case of General Townes, a regular user of laser technology. Rumor has it that Chinese General Leang possesses Paladin technology and that she uses it in place of the indigenous Battlemaster tank.

Due to the advanced nature of the Paladin, only high-ranking US generals are authorized to deploy these tanks.

Despite being costlier than most other tanks, the Paladin fared better against rocket-toting infantry and was by no means slow or cumbersome for its class. Often, the Paladin is used as a Scoprion deterrent, as its Point Defense Laser can nullify incoming Scorpion rockets, minimizing the losses incurred on its side of the shootout. Its double-duty capabilities also make it favorable for removing Scud launchers and their ballistic missiles. On a lesser role, Paladins serve as close-range fire support against infantry, as the Point Defense Laser is potent for killing infantry in one to two hits.

The Paladin's laser proves to be an effective active protection system against missiles, but the laser's poor rate of fire leaves a lot to be desired. A common tactic is to overwhelm a Paladin with more missiles than it can handle.

In open combat, the Paladin's inability to outshoot artillery and outrun bombardment becomes an exploitable weakness. Additionally, in warfare that does not involve missile carriers like Scorpions and RPG troopers, the Paladin's point defense laser becomes useless: the Paladin depends on a combination of armor, firepower and active protection to survive; abandoning the third characteristic forces the Paladin to fight short of one important combat perk.

Highly unconventional warfare such as vehicle theft and crew-killing is also a problem for Paladins. Jarmen Kell, GLA's elite marksman, could disable the Paladin by sniping its crew, leaving it open for commandeering. 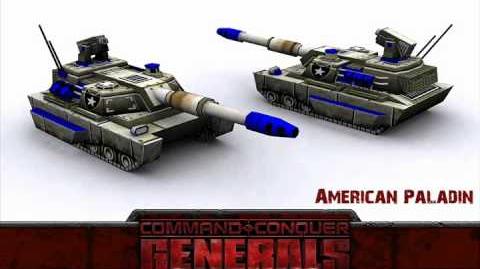 Retrieved from "https://cnc.fandom.com/wiki/Paladin_tank_(Generals)?oldid=245676"
Community content is available under CC-BY-SA unless otherwise noted.