The Peacekeepers were the Allied frontline infantry units during the Third World War.

While debate raged on about who fired the first shots of the war between the Soviet Union and the Allies, there was little denying that the Allies were now on the defensive. Nowhere was this more apparent than in the Allies' employment of its peacekeeper divisions, who resemble heavily armored riot police more so than conventional soldiers. This was no coincidence, as the peacekeepers once were responsible for bringing order to war-torn nations, as their moniker suggests. However, these men were now on the front lines of war against the Soviet Union. Peacekeepers may be relatively few in number, yet they are outfitted with superior equipment and given excellent training before they're sent to risk their lives in the name of putting a stop to the Soviet Union's expansionist agenda.

The peacekeeper program was jointly developed in the United States by top-ranking New York City police officials, the U.S. Army, and a panel of Allied top aides and strategists. The results of the program were controversial at first: the Allies green-lighted the full-scale training of forces suitably armed for heavy close-quarters combat, rather than for open battle, yet began deploying the peacekeepers in frontline encounters versus Soviet conscript divisions. Additionally, only when faced with such enemies are the peacekeepers authorized to use deadly force, and the Allies had committed to strictly enforcing this, yet never had to. After all, peacekeepers all underwent the same strict regimen and ultimately swore the same oath in support of those in need of their protection. In keeping with their mandate, peacekeepers' accessories are highly protective in nature, allowing them to effectively guard civilians--or one another.

The results of initial combat encounters silenced critics of the peacekeeper program, while incensing the Soviets. The peacekeepers' heavy shields provided them with ample protection against Soviet small-arms fire, while their Belgian-made shotguns proved remarkably effective against the Conscripts' superior numbers. This, then, was the Allies' daring strategy. By adopting a thoroughly defensive posture against the reckless Soviet advances, the Allies' frontline fighters could dam the flow of Soviet forces across international borders. The peacekeepers soon proved even more effective when working alongside the Allies' other infantry forces, ranging from its German-bred Attack Dogs to Javelin Soldier heavy-weapons specialists.

Clearly, however, the peacekeepers have not yet lived up to their name. Nevertheless, they had prevailed in many hostile encounters since they were formally introduced into the Allied arsenal. They tend to work best in small squads, huddling behind one of their shield-bearing brethren, all while steadily closing the distance with their foes--where one good shot from a Grummond-8 can send even a strong, well-armored man teetering head over heels. Through it all, the men behind the visors remain virtually anonymous, at least while on duty. While the peacekeeper program is still fairly new, peacekeepers have exemplified highly appropriate battlefield conduct, and present themselves bravely and modestly during the few interviews Allied brass has cleared. Among their many dangerous responsibilities, peacekeepers are also tasked with clearing urban areas of civilian presence when the Allies have reasonable suspicion that war is on its way.

Battlefield Surveillance also agrees that the Peacekeepers are the most effective frontline infantry units in history, dominating rival Conscripts and Imperial Warriors with superior training and equipment.

Each Peacekeeper also agrees to donate his organs in case of death.

More Intel on the Allied Peacekeeper can be found here.

Being the Allied basic infantry, they are critical to Allied strategies and tactics, and their Grummond-8 Shotguns are more than capable of eliminating high tier enemy infantry, and are also at close range capable of knocking down enemy infantry, making their opponents more vulnerable to more small arms fire, such as Tesla Troopers. Their Legion Riot Shields can stop most incoming small arms fire, such as a Shinobi's stars and sword and the Conscripts' and Imperial Warriors' rifles fire. They are still vulnerable to sniper attacks such as Spies and Natasha, however it will take several shots to bring down a shield-protected Peacekeeper.

Their shotguns can hit multiple infantry and do severe damage to groups of infantry but they are not effective against vehicles like the Sickle.

Battlefield reconnaissance has revealed at least these facts about the Peacekeepers:

• Quick-draw shield technique -- Peacekeepers are remarkably capable of switching from their shotguns to their shields as the need arises. Though the two devices are too bulky to be used simultaneously, peacekeepers are trained to be quick enough on the draw to overcome this.

• No expense spared -- Many military analysts are reaching the same conclusion: peacekeepers are a more-effective fighting force than almost any frontline infantry division in history. However, this doesn't come cheap, nor are the Allies as liberal as the Soviets when accepting new recruits into their ranks.

• Vulnerable to vehicles -- Peacekeepers are highly specialized against enemy infantry, but their bulky equipment makes them poorly suited against enemy armor. Their equipment is also too heavy to swim in, and their shotguns aren't suitable against the Soviets' roving air patrols.

• Clearing house -- Peacekeepers are equipped to deal with fortified enemy structures. They can effectively close the distance with their shields, then neutralize any hostiles inside, so long as they're not outnumbered. Once fighting from a secured structure, peacekeepers can be even more effective. 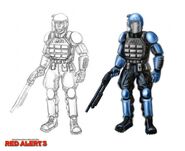 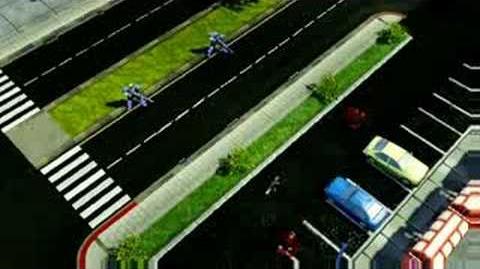 Retrieved from "https://cnc.fandom.com/wiki/Peacekeeper?oldid=235861"
Community content is available under CC-BY-SA unless otherwise noted.