This rifle is quite compact, can be easily broken down for transport and fires highly damaging armour-piercing bullets, using detachable four round box magazine. Additionally, the scope in this series of rifles is outfitted with an integrated directional microphone and passive night vision module.

The sniper rifle is the basic rifle of Deadeye and Black Hand Sniper characters in multiplayer of Renegade, and commonly considered to be the superior one, despite dealing less damage than the Ramjet rifle. Reason? No tracers.

It is generally a very effective weapon against enemy infantry, as a headshot meant instant death. Like all other anti-personnel weaponry, this firearm was somewhat effective against lighter vehicles but did near-unnoticeable damage to heavier tanks.

It seems the weapon went through quite a few iterations in the game. From the first low poly model present in some beta screenshots, it was later retooled into a high polygon version, looking quite futuristic. Due to unknown reasons, it was later changed to the current, more modern look.

The high polygon version still exists in the character purchase screens, however. 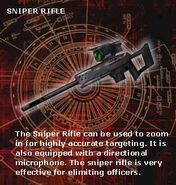 Retrieved from "https://cnc.fandom.com/wiki/Pierce_sniper_rifle?oldid=150049"
Community content is available under CC-BY-SA unless otherwise noted.