Poland (Polish: Polska), officially the Republic of Poland (Polish: Rzeczpospolita Polska), is a country in Central Europe bordered by Germany to the west; the Czech Republic and Slovakia to the south; Ukraine and Belarus to the east; and the Baltic Sea, Lithuania and Kaliningrad Oblast, a Russian exclave, to the north. The total area of Poland is 312,679 km² (120,728 sq mi), making it the 69th largest country in the world.

The first Polish state was baptized in 966, within territory very similar to the present boundaries of Poland. Poland became a kingdom in 1025, and in 1569 it cemented a long association with the Grand Duchy of Lithuania by uniting to form the Polish-Lithuanian Commonwealth. The Commonwealth collapsed in 1795. Poland regained its independence in 1918 after World War I but lost it afterwards, as the Soviet Union invaded it for the second time, after losing the first war in 1920 after the Battle of Wistula river.

The Soviets have reshaped the territorial borders of Poland, annexing most of the Eastern territory into the Soviet Ukrainian Republic, while in turn annexing Germany's eastern territories to Poland in exchange for relative peace. Though supposedly an independent nation, Poland was effectively controlled by the Soviet Union and treated little better than a slave country, with all significant decisions made at the Kremlin and an extremely harsh occupation leveled on the common man. While Polish forces loyal to the legitimate Republican government in exile in London did conduct a guerilla war against the occupying Soviets and their local auxiliaries and many other Poles defied the Communist regime covertly, such actions were punished brutally and Soviet reprisals exacted a grisly cost for even the most minor resistance. One example included the case of Torun shortly before the outbreak of open war between the Allies and the Soviets, where villagers who had escaped from an inhumane Soviet chemical weapons test were sheltered by civilians and the local underground in a village just outside the city, which led Stalin and Marshall Gradenko to order the complete destruction of all settlements on the outskirts of Torun and the immediate execution of all caught nearby, an order that was savagely carried out by the Soviet Air Force and its paratroopers. Poland also acted as the staging grounds of the USSR attack on Germany. Unfortunately for Stalin and his puppets, the war turned against him and Allied forces, most notably including American forced led by General Carville, liberated Poland in conjunction with the surviving Polish resistance as the puppet regime collapsed as the Red Army fled. After the war, Poland remained neutral,as the victors- in an attempt to avoid tensions in the Ukranian areas they were occupying- did not return them the lands belonging to Poland before the Soviet occupation. Nevertheless, the country developed a thriving and successful economy and accomplished, well working political system.

When the First Tiberium War begun, Poland became a battlefield once more, this time in the war between Nod and GDI. Białystok, a city in the eastern parts of the country, suffered the worst, as it's civilian populace was killed and the attack blamed on GDI. Eventually, with the defeat of Nod, everything returned to normal.

With the proliferation of Tiberium, the southern lands of Poland gradually turned into a Yellow Zone and the Bieszczady mountains slowly turn into a Red Zone. As of 2047, half of Poland is designated as a Yellow Zone, part of the Y-1 Zone, and the other as Blue Zone B-1/B-3. 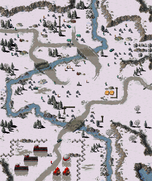 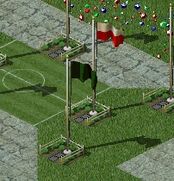 Flag of Poland in Mental Omega. It can still be found in the FinalAlert map editor.
Add an image to this gallery

Retrieved from "https://cnc.fandom.com/wiki/Poland?oldid=234437"
Community content is available under CC-BY-SA unless otherwise noted.