The power plant supplies electricity to other structures. It's a visitable location in Renegade.

This essential structure generates large amounts of power, enough to supply numerous structures with electricity for long periods of time. It's exact method of operation is unknown, as while the original Tiberian Dawn power plants were nuclear, the internal schematics do not match any known structure.

The building retains its general shape from Tiberian Dawn. The exterior is a semi-circular building wrapped around the central cooling tower. Entrance is via two automatic doors at each end of the semi-circle.

The control center lies inside, divided into two stories. The first one, accessible via surface exits, rests on a balcony, with general information screens and some control consoles present there. The second one, below, is where the actual controls lie, with power monitoring stations, the plant's mainframe and control consols are located. From here, one can access the power core sub-level via an elevator.

The power core is composed of three rooms. Beyond the access hallway from the elevator lies the Master Control Terminal. Opposite the MCT is the maintenance preparation room, with lockers lining the walls and a service lift leading to the top of the power plant placed in the adjoining corridor.

Finally, beyond a separation chamber, lies the power core, lit in bright blue.

In multiplayer, the layout of the building is simplified greatly. Instead of several levels, everything is now on one plane, with the MCT on the far side of the building and two purchase terminals on the opposite wall. 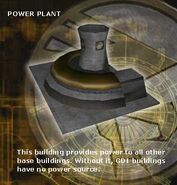 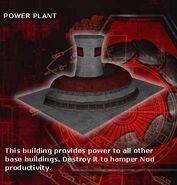 Nod Power plant in Renegade database
Add an image to this gallery
Retrieved from "https://cnc.fandom.com/wiki/Power_plant_(Renegade)?oldid=177161"
Community content is available under CC-BY-SA unless otherwise noted.