The Prism tank was the Allies' anti-structure artillery unit composed of a Prism cannon mounted on a large tank chassis. It was seen during the Third World War and the Psychic Dominator Disaster.

A virtual Prism Tower on wheels, this experimental Allied tank fires white-hot beams of light to fry enemy units. The beam bounces to other target, giving the Prism Tank the ability to take out multiple units at once. Particularly good against massed units, Prism Tanks are best off when supported by basic offensive units like Grizzly Tanks, as they're relatively slow-moving, and take a few moments to recharge their beams.[1]

The Prism tank was developed by Professor Albert Einstein, who based the artillery unit off the designs of the Prism Tower base defense structure. It was first deployed by the Allies in Operation: Free Gateway after Special Agent Tanya destroyed the Psychic Beacon in St. Louis. In that operation, the Prism Tank made short work of the Soviet base and the Allies quickly recaptured the city. The Prism Tank was available for use by the Allies for the rest of the Third World War. A squad of Prism Tanks were Chronoshifted by the Chronosphere into Moscow to support the Allied assault on the Kremlin.

In the Soviet campaign, Prism Tanks are Chronoshifted into the Ural Mountains to destroy a Soviet battle lab that was researching the Apocalypse tank. Prism Tanks were last seen in Point Hope, Alaska to ward off the Soviet offensive of the last Allied base in the world.

Prism tanks were also utilized during the Psychic Dominator Disaster.

This powerful Allied tank uses a weapon similar to the Allied Prism Tower. The powerful and deadly beam of light launched from the Prism Tank’s cannon radiates from the target to hit other nearby enemies, allowing this vehicle to single-handedly destroy entire groups of enemy units. Their splash damage, combined with their long range, make them deadly weapons against large groups of weaker enemies such as an entire army of basic infantry units. The range of dispersal depends on how close the Prism Tank is to its initial target.

Prism Tanks are highly effective against infantry, structures, and light vehicles, and better yet, had sufficient range and power to act as a siege unit, even against heavily fortified enemy bases. A single elite prism tank can decimate a Soviet infantry division. In a group, Prism tanks can be extremely powerful. A small group of prism tanks could easily lay waste to an undefended base. Three or four could destroy an Apocalypse Tank. A group of twelve or more prism tanks can overcome almost any land opposition.

Unfortunately, the prism beams cannot be combined into a more powerful blast like their tower-mounted "cousins". In addition, although the beams are devastating, they have a slow rate of fire. It also suffers from light armor and a lack of anti-air defenses. A single volley from an Apocalypse tank is enough to completely destroy a prism tank. Armored tanks such as Apocalypse tanks and air units are therefore good counters against these vehicles. Even War Miners, with their heavy armor, can be a threat to it. It is wise to escort Prism Tanks with Grizzly Tanks and IFVs. The Prism trajectories is straight, so the tank is more effective in flat terrain. If the prism tank encounters enemy in higher terrain it will manoeuvre to gain a line of sight with the enemy. This can be dangerous as the tank may have to move closer to its target; negating its long range and putting it at risk due to its light armor.

Prism tank rushes are extremely difficult to deal with in RA2 except by a counter-rush; but if Prism Tanks are sufficiently massed and well-protected by other units, it may be difficult to get close enough to even fire the one shot needed to take out their weak armor.

However, in Yuri's Revenge new Soviet technologies provide an easy counter to what was once the backbone of Allied land warfare: Siege Choppers organized into hunter-packs of 4-5 can quickly intercept and destroy Prism tanks. Undeployed and in the air, the Siege Chopper's machine gun is normally not useful against more than infantry, but the Prism Tank's eggshell-thin armor is so weak that a handful of Siege Choppers can easily take them out. This, in turn, will provoke Allied commanders to protect their Prism Tanks with IFV's for anti-air cover, but this will make what was once a conventional attack now very expensive. Yuri's Floating Discs were also deadly against them, and had sufficient armor to survive several anti-air attacks should there be any.

After the events of the Psychic Dominator Disaster, the Prism Tanks continued to serve the Allied forces. After the conflict, a new model of the Prism tank was developed and put into production.

This model was given better armour and stronger firepower, followed by a new look that made it more similar to the Mirage tank (which was not produced at the time) rather than the old Prism tank. It could outrange Tesla coils and also deal considerable damage to Soviet tanks. It was the most powerful Allied ground unit.

However, the occurances of the Post-war Crisis, along with the preceding wars involving the Allies and the Soviets, have been reversed. During the War of the Three Powers, the Prism tank was replaced by the new Mirage Tank that was armed with a Spectrum turret, similarly used as the Prism technology in the Third World War. Its role of a siege unit was taken by the Athena cannon. 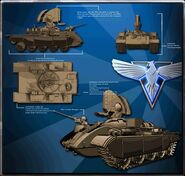 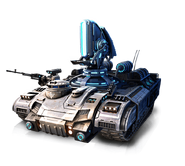 Retrieved from "https://cnc.fandom.com/wiki/Prism_tank_(Red_Alert_2)?oldid=245136"
Community content is available under CC-BY-SA unless otherwise noted.