The Prism Tower was an Allied advanced defense structure developed by Albert Einstein, used during the first and second iterations of the Third World War.

The prism tower consists of 6 rotating mirrors on the top of a tower. These mirrors are positioned to form a charging chamber to produce a photon beam to be directed by the tower's top mirror. A single prism tower's laser beam is less powerful than a discharge from a Tesla coil, but its rate of fire is higher and it has a slightly longer range. Two or more adjacent prism towers have the ability to combine their beams, increasing the power of the resulting beam, a property that Tesla coils do not possess. This is done by firing off a beam at another tower's mirror, often in a chain, after which the final tower that the beam reaches fires an enhanced beam that is proportionally powerful to the number of chained prism towers.

They are particularly effective against heavily armoured tanks, even Apocalypse tanks. Artillery units outrange them, however. Combining beams from nearby towers creates a blast that can destroy a tank in a single hit, but has a downside: prism towers that are close to each other can only focus on a single target at a time, making them vulnerable to swarms of weaker, cheaper units.

The prism tower was developed by Albert Einstein to counter the Soviet Tesla coil. The technology was first used at the Pentagon, as seen during Operation: Liberty.

The Soviets attempted to replicate prism technology in a secret base near Tulum, Mexico. They placed turrets with larger mirrors upon Mayan temple ruins. This version was more powerful and had a faster rate of fire, although was also considerably bulkier and had a less-refined appearance. The prototypes and the surrounding Soviet base were destroyed by a group of Navy SEALs during Operation: Sun Temple.

During the Post-war Crisis, prism towers were still used by Allied forces, and retained the ability to combine their beams.

Despite the disappearance of Albert Einstein, the prism tower was replaced by the functionally identical spectrum tower in the third iteration of the Third World War. 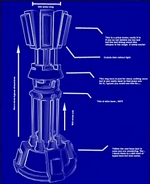 icon with no text

In the campaigns, prism towers are much more potent when combined, as only two could destroy a Soviet Apocalypse tank in a single beam, while it took the combined beams of five towers in skirmish mode.

Retrieved from "https://cnc.fandom.com/wiki/Prism_tower_(Red_Alert_2)?oldid=245026"
Community content is available under CC-BY-SA unless otherwise noted.