The Scrin subfaction Traveler-59 uses a mutation of the Mastermind, known as the Prodigy.

A highly modified version of the Mastermind, it can mind control several units in a single area. Highly effective, it could mind control an entire population within days of arriving. It still retains the ability to control a single unit, and can be used at the same time as its area ability, if need be.

Little remains known about this unit. Even among the Scrin, the origins of the Prodigy remain unknown. Its birth is speculated by many to be a result of dark experiments conducted by Traveler, involving genetic engineering and inbreeding, or it could've been an experiment gone horribly wrong with a Mastermind. The results, however, are undeniable. A single Prodigy, blink-teleported onto a host planet, is often all that is necessary to bring the population under Scrin control within a matter of days.

The spawn of these creatures can be planted onto human brains, resulting in 'human' mind control units loyal to the Scrin, called Cultists.

With a personal Blink pack, it can teleport anywhere in the battlefield. Notably, a Prodigy would covertly transport itself into an area, causing anyone under its control to inexplicably attack their side. The Prodigy also has the ability to teleport units at its location, using the chaos to its advantage to send in reinforcements. A Prodigy can also go into an Eradicator Hexapod, granting the Eradicator's ability to teleport. However, one might be wiser to simply have the Prodigy use its Teleport Units ability on the Hexapod. This not only allows for using the Prodigy's other abilities to aid the Hexapod in battle, but also frees up a turret slot on the Hexapod for additional weapons.

Despite its awesome power, the Prodigy can not use its mind control on Epic Units. Its area mind control is limited to ground forces, and cannot affect aircraft (although it is still capable of controlling a single aircraft while it is on the ground). Also, the unit lacks a direct weapon to defend itself. Worse still, because of its power, enemy Commanders make the Prodigy the first target to eliminate.

Above all, use caution when choosing targets for any of the Prodigy's abilities. For example, using Area Mind Control on units is preferable to the normal, single target Mind Control since only the single target ability affects enemy Structures. Also, targeting an enemy Barracks, Hand of Nod, or rogue Portal would allow for production of Engineers or Assimilators from within the opponent's base, potentially allowing a lone Prodigy to take over an entire enemy position. Alternatively, mind controlling any building that provides a Build Radius would allow for the deployment of a Storm Column within their base, wreaking far more havoc than merely capturing the target Structure alone. In all of these cases, caution must be used to ensure the rather expensive Prodigy doesn't get killed. For this reason, mind controlling any enemy unit at all is a good first step so that they can draw fire, with preference given to enemy Sniper Teams and Shadow Teams that might otherwise cut down the Prodigy in a single shot.

Finally, keep in mind that while Mind Control has a limited activation range, once a target is controlled, the link can be maintained from across the map. Once the Prodigy mind controls a target, quickly Blink away to ensure the Prodigy's safety. 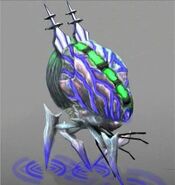 Prodigy with a mind control link
Add an image to this gallery
Retrieved from "https://cnc.fandom.com/wiki/Prodigy?oldid=219097"
Community content is available under CC-BY-SA unless otherwise noted.