Project ReGenesis is a major research initiative whose objective was creating the next generation of humans, Homo Sapiens Tiberius. Overseen by General Raveshaw and the Black Hand, the Project is supplied with the best minds Nod can get, willing or not.

Three of GDI's finest scientists, Dr. Ignatio Mobius, Dr. Sydney Mobius, and Dr. Elena Petrova, were kidnapped from a GDI research facility in Guatemala and transported to secret Nod research centers. Their expertise, bolstered by Nod's own vast knowledge of Tiberium, provided Nod with the first crude but effective methods of human augmentation.

Dr. Petrova was actually a member of the Brotherhood and the real head of the Project. Once the process was perfected, Petrova underwent the augmentation herself. 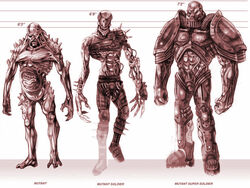 The project yielded several results and was an important step in creating a controlled method of Tiberium augmentation. Three types of augmented humans (Homo Tiberius) were commonly encountered during the closing stages of the First Tiberium War:

Destruction of the Project

Sources within GDI reveal that Captain Nick Parker was largely responsible destroying the Project. He came into play after Nod forces captured three of GDI's top researchers and was ordered to find them and bring them back alive. Havoc was first sent to rescue the scientists from a Nod prison complex that included a hydroelectric dam, a power plant, and even an Obelisk, but Nod spirited them away on board a plane before Havoc could reach them. He briefly fought Carlos Mendoza, a mercenary hired by Raveshaw.

Attempting to follow the plane he was shot down by Sakura Obata, a former member GDI operative. Surviving the crash he discovered information about the scientists by infiltrating a Nod communications center. Although he succeeded in recovering the data he was accosted by Sakura, now on Nod's payroll. When he destroyed the helicopter he inadvertently triggered a dormant volcano that destroyed both the Nod facility and the island - Havoc escaped on board of a Nod submarine. Information recovered from the communications center revealed that they might be held near a Nod-controlled castle. The captain had to first rescue his teammates, who had made an emergency landing in the nearby village. This accomplished, Havoc managed to infiltrate the Chateau and rescued Dr. Sydney Mobeius, although he was unable to recover Dr. Petrova nor Dr. Mobius. Upon their return to the village a tactical nuclear strike was ordered on their location.

Being at a loss, GDI allowed Sydney to aid Havoc in locating her father. Unfortunately, they were ambushed and captured by Black Hand stealth soldiers. Havoc was later freed by Sakura who also helped him infiltrate the nearby research base and allowed him to save Dr. Ignatio Mobius. Sydney Mobius was, at the time, already en route to the Cairo Temple of Nod and Dr. Petrova revealed herself to be willingly working with the Brotherhood.

General Locke quickly responded to this situation and ordered Captain Parker to immediately deploy in Cairo and attempt to infiltrate the Temple. Havoc succeeded, infiltrating a crashed (possibly) Scrin saucer on the way. Inside he managed to reach the Temple core and save Sydney Mobius after killing the transformed Petrova. After aiding Sydney in rewiring the nuclear missile housed within to detonate prior to launch they both evacuated, ending the Project ReGenesis prematurely.

With the destruction of the Cairo Temple, and several major Black Hand facilities during the war, Project ReGenesis was essentially halted, and much of the Black Hand's equipment, such as the Chameleon stealth suit, was destroyed. However, the technology did not disappear and was preserved in secure Nod databanks.

The destruction of the ReGenesis project was not the end of Nod's efforts to create the Homo Tiberius. Their continued research would later pave way for the development of Divination. That research lead to development of cyborgs, the Cyborg Commando, and advanced methods of accelerating human evolution with Tiberium. Its latest offshoot is the Tiberium infusion, introduced in Yellow Zones by Nod after the Firestorm Conflict.

As for the supplementary technology developed during the closing stages of the war, of the laser rifle, Volt auto rifle, laser chaingun, and personal ion cannon, others were incorporated into other projects or further developed, such as Nod's lasers of the Second Tiberium War and after.

The Nod Awakened and Enlightened cyborg infantry of 2052 may also be a further development of this project. Cybernetic legs can speed up Saboteurs, Tiberium Troopers, and the Cyborgs themselves.