The Prospector is the Allies' basic resource gatherer and base expansion vehicle in the War of the Three Powers.

The vehicle we know as the prospector is basically just a well-put-together material supply truck suitable for the collection and transportation of raw resources. Even if it does convert into a military command hub, the prospector is close cousins with civilian trucks, and like most civilian trucks, carries no defenses whatsoever. Because of this unassuming nature, the Allies continue to express concern and dismay that prospectors now appear to be priority targets for Soviet forces. It wasn't always this way. Originally designed as industrial pick-ups, prospectors gradually became more important to Allied field posts and strategic holds. Soon enough, these vehicles began to see action on the front, in the midst of conflict with Soviet forces.

Prospectors, of course, are used mostly for collecting ore quickly and efficiently. Some yet argue that the war between the Soviet Union and Allied nations is not about ideology but rather about ore. However, this is an unpopular stance due to three compelling facts about the world's premier resource for military-industrial manufacturing. One: Ore has always been fairly abundant in virtually all developed nations of the world, from Switzerland to Japan, and from Greece to Iceland. Indeed, even the middle of the sea offers its fair supply of ore. Two: Ore is a natural, renewable resource. The thought of fighting over control of this substance is just as unimaginable as, say, the thought of fighting over sunlight, or drinking water, or radio-waves. And three: Ore just isn't a concern to the people of the world. Year after year, public poll after public poll, ore proves itself time and again to be little more than an afterthought in people's perception of the world's top issues. Well-Refined Ore Corporation, a large Boise-based corporation that offers vertically-integrated ore refinement solutions and originally invented the prospector, has a company motto that's very to-the-point: "Ore: Don't Even Worry about It."

Nevertheless, as tensions rose between the Soviet Union and Allied nations, their top providers of military goods increasingly sought out greater supplies of ore so that their production could continue unabated. And because ore is not so common that it may be found just sprinkled around on the ground, the Soviets and the Allies began to explore new ways to gather up the stuff directly from dormant mines. This was around the time when the Allies retrofitted their prospectors with magnetically-sealed cargo bins as well as with amphibious capability, plus military-grade components for their communications arrays. In retrospect, these changes may have coincided with the Soviets' increased aggression toward prospectors. In spite of the increasing danger and undeniable monotony of operating an Allied prospector, drivers of these vehicles are known for their cheerful demeanor and customer-friendly attitude toward their work. This may be in part because the Allies pay these laborers well, likely because prospectors ultimately are the key to letting the Allies manufacture new equipment in the field.

Battlefield reconnaissance has revealed at least these facts about the Prospector:

• Easy does it -- A single prospector is included in the cost of an Allied ore refinery, and will immediately begin gathering resources from the nearest ore mine. One prospector is designed to efficiently gather from a single source, so it simply needs to be defended as it goes about its gathering route.

• On-demand Command Hub -- Each prospector is outfitted to convert into an Allied command hub when the need arises (though the conversion is irreversibly complex). Command hubs provide clearance for other Allied structures to be built nearby, and also relay other important data to those structures.

• Amphibious resourcing -- Prospectors can traverse land and water with equal ease, because of their automated aqua-sensitive air cushions. Their driving characteristics are similar on all terrain.

• Unarmed but not defenseless -- When threatened by Soviet conscripts or other raiding parties operating on foot, Allied prospector drivers have been known to drive straight through the danger. Running down enemy combatants is strongly discouraged by Allied publicists.

Unarmed and relatively weak, the prospector is nevertheless the most important unit in the game as an Allied player. It provides a source of income and can deploy into a command hub, which, most importantly, has a separate upgrade queue, allowing to gain clearance at a factory while the construction yard is busy expanding the base.

Furthermore, it's fully amphibious and can deploy into command hubs on water.

In the Red Alert Iphone game this unit does only one thing: expansion.

Upon exiting an Armor facility

Upon exiting an Ore Refinery 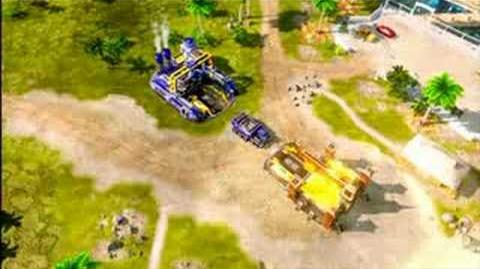 Intel on the Prospector

Retrieved from "https://cnc.fandom.com/wiki/Prospector?oldid=237574"
Community content is available under CC-BY-SA unless otherwise noted.