Protect Waste Convoys is the alternative Nod mission to Establish Nod Presence within the Nod campaign of Tiberian Sun. It nevertheless has the same goal of infecting the GDI base with chemical missiles.

The road through this sector is a vital supply link. If a foothold is firmly established and a Tiberium Waste Facility is built, Nod chemical missiles can be launched from the region. The GDI base in the area has no defense against the missiles, and can be destroyed at your leisure once the waste convoys start arriving.

﻿Despite Kane being most disappointed that his most trusted followers Slavik and Oxanna had gotten themselves captured after falling into the GDI trap that was the research facility; he decided to give them a second chance following their escape from the GDI prison camp in Norway.

Kane had new Tiberium-based 'chemical missiles' to deploy against the GDI in Europe but he needed to escablish a suitable centre for their manufacture and deployment. The optimal location for this would of course be Central Europe and Denmark and Germany both were up for grabs.

Denmark had fought in the First Tiberium War on the side of Nod and had been integral to their invasion of Germany before it was occupied by GDI forces. Denmark had since adopted a more or less neutral stance and had thus far avoided involvement in the Second Tiberium War.

Nod sought to bring Denmark back into the fold but the GDI had never withdrawn completely from Denmark after the First Tiberium War; they had left a large, highly fortified base in Jutland. It's fall would be essential to and symbolic of Denmark's 'liberation' by Nod yet at the same time it was imperative that Anton Slavik complete the establishment of a Tiberium Waste Facility to begin the production of chemical missiles as rapidly as possible.

It was therefore decided that instead of trying to destroy the base first and then establishing the Tiberium Waste Facility, Anton Slavik would instead begin construction as soon as possible and then use the resulting missiles to help destroy the GDI base.

The GDI base was indeed powerful, they had even deployed some of their terrible new Disruptor tanks there. But such was the importance of the battle that the Nod forces had been outfitted with advanced weaponry of their own, such as the advanced Stealth tank, Subterranean Flame Tank and the dreaded Obelisk of Light.

There was a problem however. Probably due to the GDI's control of southern Sweden, Nod ships were clearly unable to safely land on the eastern coast of Jutland and land the Weed Eaters full of the Tiberium waste that they had secretly stockpiled. This would have allowed them to arrive from the south-east, at the location of Anton Slavik's new base. Instead they had to land them on the Atlantic west coast.

While owing the absence of any extensive GDI presence in Denmark moving them across the countryside would not be a problem, they would have to bypass the GDI base, which was to the north of the Nod position since they could not conceivably move the Weed Eaters through Jutland and arrive to the west of Slavik's base, due to probable interference from the local authorities and of course traffic. This meant they only route to send Tiberium waste to Slavik was along the track running south-east through the area; which meant the waste convoys would have to pass adjacent to the GDI base to the north.

As long as Slavik could defend his base against Orcas and Disruptors, establishing the Tiberium Waste Facility would not be the main problem as long as he could gather some of the nearby Tiberium; but he would also have to secure control of the trail in order to facilitate the passage of the Weed Eaters.

Anton Slavik was able to first establish and then defend his base in the area against whatever attempts of the GDI made to destroy it using their latest advanced weapons. He was eventually able to establish his Missile Silo and Tiberium Waste Facility as they had planned.

At this point the Weed Eaters were dispatched from the coast to deliver the Tiberium waste to the facility for processing. Nod forces were now forced to go on the offensive in order to clear the trail and eliminate the GDI forces and outposts that were attempting to control the trail, in order to enable at least some Weed Eaters to reach the facility.

But owing to the leadership skill of Slavik, the trail was successfully cleared of GDI forces and at least some Weed Eaters got through successfully. Eventually, the Tiberium Waste Facility had enough Tiberium waste to complete their first chemical missile warhead.

Destroying the GDI base

With the trail secure and the first missile completed it was now time for the GDI base to be eliminated. There were essentially two ways Nod could had achieved this task.

Firstly he could have used the new chemical missiles to destroy key buildings or defenses in order to weaken the base so that it could have been more easily destroyed in a more or less conventional assault.

Secondly however he could used a stealth tank to scout out the base to discover the location of a group of GDI infantry within the base. Had these infantry come into contact with the gas cloud some of them may have transformed into baby visceroids which would eventually have become adult visceroids and wrecked havoc on the GDI base, along with whatever Nod forces or danish civilians they might happen to come across. It was this strategy that CABAL likely referred to when he spoke of 'infecting' the GDI base.

The first approach would have likely been more costly to Nod forces but would have minimised the potential damage caused to the local civilian population in the area by the uncontrollable adult visceroids as well as the environmental fallout. The second approach would have been relatively cheap, as long as the unpredictable visceroids did not turn against Nod before they could be terminated. Additionally the second strategy would have required considerable time, luck and patience to carry out.

But however it was achieved, Slavik was able to utterly eradicate the GDI base and take control of Jutland for Nod. 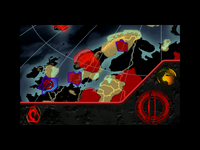 With the fall of the GDI base at Jutland; Denmark was swiftly 'persuaded' to return to it's old Nod allegiances, giving Nod control of the Baltic. Nod rapidly began the expansion of it's chemical missile infrastructure, quickly creating a whole raft of Tiberium waste facilities and missile silos in Denmark.

Soon, GDI forces all over Europe would come under relentless assault from these new weapons. Only Hammerfest, protected by its firestorm barriers, was safe from the rain of Tiberium death. In particular, Nod forces were to make rapid gains in Poland and Norway; overturning GDI military zones and overthrowing the GDI supporting governments in Oslo and Warsaw.

These Nod gains would not come without a high cost to civilians however.  The new missiles, even if they had not been used directly against civilian areas created clouds of deadly Tiberium gas which often floated into them causing mass death. Additionally such clouds when they came into contact with human or animal life often created deadly Tiberium lifeforms such as the visceroid that would often indiscriminately attack military and civilian targets alike; not to mention their lifestock and the local wildlife.

But the GDI were presently engaged in the development of a powerful new weapon of their own that might still turn the tide in their favour. The Mammoth Mk. II assault-walker was being developed in Britain and was hoped to more than replace the role once held by the obsolete Mammoth Mk. I battle tank; now only used by the Forgotten and perhaps some national armies.

Upon learning of this, Kane set Nod to a mammoth task of it's own; the invasion of Britain and the termination of the project before it was too late.

In this mission, the 'chemical attack' suggested by CABAL may not be as effective as one may think for two reasons. Firstly, due to the absence of Tiberium vein locally on the map, the supply of chemical waste is entirely dependent on the convoy (only one truck at a time), which will have to cross the map diagonally to complete its delivery, wasting much time. Secondly, even if the the chemical missile is filled and successfully launched toward the enemy base, oddly enough, the adult visceroids created in the process may be docile toward the GDI.