The Proton Collider is the Allied ultimate weapon first introduced in the Third World War.

When the Soviets removed Albert Einstein from the space-time continuum, many of his great inventions were lost as well, including the Weather control device. Instead, Allied scientists created a brand new super weapon: the Proton Collider. It is a large, artillery-like weapon that, when activated, fires bolts of energy at the target area. Five such bolts are fired at one time, and upon impact, they cause a molecule-melting chain reaction, making the Proton Collider an extremely effective weapon against densely packed enemy structures and units.

The technology behind the Proton Collider is one of the Allies' most closely guarded secrets. However, the Allied leadership (as directed by European Union president Rupert Thornley) agreed to disclose this secret to the FutureTech Corporation in exchange for their services. The result was the FTAC-X2 Harbinger gunship, an experimental heavy support aircraft powered by Collider fuel cell and equipped with miniaturized Collider Cannons.[1] The same Collider fuel cell was also used to power FutureTech's experimental Future Tank X-1.[2] The FTC-X3 Pacifier Field Artillery Vehicle's collider-bomblets also work on the same principle, albeit on a smaller scale.[3] 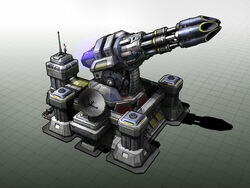 The Proton Collider possesses the greatest area of effect of all superweapons in the game, but does the least amount of damage per unit of area, unless there are large numbers of units in the target area. Its destructive potential increases with any enemy units caught within the blast zone, dealing more damage than usual. (Normally a construction yard would take damage equal to about half of its health, but having additional units nearby can increase the damage up to 60-75% of Construction Yard's HP). Unlike other ultimate weapons, the Proton Collider, for all its destructive capability, cannot deal any damage to aerial units.

In a later patch, The Empire's Nanoswarm was counted as unit (as the shield is composed by millions of nano machines), allowing the Proton Collider to destroy any structures, even Construction Yards and other super weapons, with a single salvo by activating the Nanoswarm Hive on the target area immediately after the first bolt impacts. Only those under the influence of the Iron Curtain can survive this destructive combination.