Recent intel surveillance has revealed and confirmed our worst fears: the Empire of the Rising Sun possesses a Psionic-based Superweapon that, when unleashed, creates a psionic storm, capable of damaging everything within a large radius. Codenamed the Psionic Decimator, detailed information about this weapon is unavailable, except that it is the result of Empire's research on psionics. It is highly recommended to destroy this weapon before it is activated.

Unlike the similarly named Psychic Dominator, the Psionic Decimator harnesses raw psionic power to destroy the enemies rather than controlling them. According to recent recon images, the six chambers around the Decimator, apparently the source of its psionic power, contain what appear to be clones of Yuriko Omega. It is rumored that these clones are the end result of Imperial psionics/genetic research out of Yuriko at Shiro Sanitarium. 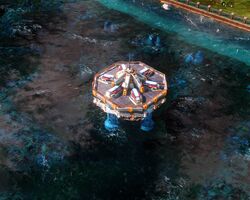 A Psionic Decimator built on water

In Forever Sets the Sun, Tatsu used 3 installations of it to try and eliminate Lissette and the Allied Commander, but failed because the Allied ConYards survived the blast (if Allied units moved far away from their bases, they could also avoid the superweapon's destruction, albeit they lost half of their health).

The Decimator was not seen during the Soviet Campaign, most likely due to the Soviets' unexpected attack on Mt. Fuji and the assassination of the Emperor.

In the Imperial Campaign, the Decimator was first tested in Yokohama when Allied and Soviet were trying to intercept all communications in order to let Imperial submitted their defeat but failed. When Tatsu had given an order to destroy the time machine. It was fully authorized to assist the Shogun Executioner in wreaking havoc and laying waste to Moscow. Later, it was deployed in Amsterdam to destroy the Allies and Soviets based around the FutureTech Lab.