The Psychic radar is a structure used by Yuri in Yuri's Revenge.

This structure gives Yuri's forces Radar during a battle and the counterpart of the Allied Airforce Command Headquarters, and the Soviet Radar tower. The Psychic Radar can also predict where the enemy will come and what will they attack within a certain radius, just like the Soviet's old Psychic Sensor. In one of the alternate times of the Third World War, Zofia is able to extract the rough blueprint of these structure from the Yuri's file and incorporated into the Soviet arsenal (i.e psychic sensor). The structure itself is comparable to Allied Spy satellite communication terminal, but it has less potency, as it is unable to access psychic reveal facility.

In addition, the Psychic Radar can do something that their counterparts could not. This structure could reveal a portion of the battlefield psychically every once in a while. It should be noted that the Allies have a more effective way of revealing the battlefield as they used the Spy Satellite Uplink and that the Airforce Command Headquarter could produce aircraft, whereas its counterparts could not, giving it a distinct advantage over other radar producing structures. Multiplying these buildings does not add or affect Psychic Reveal abilities, but they nonetheless provide the ability with no additional requirement.

Still, this powerful technology used by Yuri was an essential for Yuri's bases that were spread throughout the globe.

One could tell when this ability was used, as when Psychic Reveal is used, a unique sound will be made. 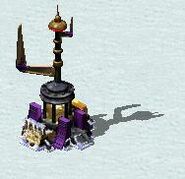 Retrieved from "https://cnc.fandom.com/wiki/Psychic_radar?oldid=228621"
Community content is available under CC-BY-SA unless otherwise noted.