Can mind-control a maximum of 3 ground units

The Psychic Tower was the primary Yuri defense structure during the Psychic Dominator Disaster.

During Third World War, Yuri was tasked by Romanov to construct towers called Psychic beacon to control entire cities at a time. When Yuri split off from the Soviets, he adapted this technology to create a tower that could be built far more quickly and cheaply than a psychic beacon. The net result of his tinkering was the psychic tower.

The psychic tower was a tall rod with the primary psychic antenna on the top of the central spire. Around the central spire rotated several psychic matrices, which could automatically capture the minds of units that entered the range of the tower. However, whenever a unit was captured, one of the matrices had to be devoted to maintaining control of that unit. As such, the psychic tower could only control three units at a time. Furthermore, the psychic tower suffered the same inhibitions as other psychics: it could not control other psychics, miners, Tanya, Boris, attack dogs, robot tanks, or mind-controlled units.

Yuri commanders would use the psychic towers to turn enemy units against each other. If powerful units were captured, then they would fight for the Yuri player to help defend his base. Furthermore, captured units could be sent into a grinder for a little extra cash.

Psychic towers were vulnerable to mind-control resistant units, and also large swarms of enemies, such as Conscripts. Also, if the units the Psychic Tower controlled were particularly weak, the tower could be destroyed with little or no interference from the captured units, who could be then freed. This was a particular bother to Yuri, as if left on its own, the Psychic Tower would have no choice but to control the first three units it saw, whether they be weak or not.

In addition, if the power would run out, all units mind controlled by the tower would be instantly freed, and will remain free even after the psychic tower is reactivated.

Prism Tanks and V3 launchers can outrange the mind-control and easily take out these medium-armoured towers, especially Prism Tanks, for there are no means to intercept their destructive beams. Psychic towers also have no defense against aircraft. 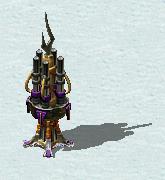 Retrieved from "https://cnc.fandom.com/wiki/Psychic_tower?oldid=226741"
Community content is available under CC-BY-SA unless otherwise noted.