The Radar Tower served the function of providing radar access to the Soviet army. In this sense it is the Soviet version of the Allied Air Force Command, although it does not support aircraft.

The Soviet Radar Tower was essentially a modernized version of the radar domes used in Second World War. It shared many similar internal designs, including a spacious operators quarters at its base which was constantly manned by technicians and cartographers who interpreted the buildings data for EVA operators. Externally, the building was vastly different from its predecessor, sporting a large and bulbous radar dish with several smaller ones budding on the sides of the support tower. Unlike the radar methods used by the Soviet Union's enemies, the Soviet Radar Tower initially had no special features or abilities other than its ability to provide radar, but during the Psychic Dominator Disaster, it allowed the use of Spy planes.

After the war, with the Cherdenko's trip to 1927, its equipment was integrated with the construction yard in the War of the Three Powers.

Upon building or capture, the commander activates a radar map of the currently discovered battlefield. It also gives the commander authorisation to build more advanced units and structures, such as Tesla coils. During the Psychic Dominator Disaster, it is also possible to periodically call in Spy Planes to scout enemy positions. The plane, being armoured enough, can act as an "AA magnet" to protect other airborne units like cannon fodder. The spy plane reveals larger area with no cost than the psychic reveal function, but the plane can still be shot down.

If the Radar Tower is infiltrated by a spy, the Soviet radar system will momentarily shut down, resetting the map to show only what is seen by allied units at the time of restart. The Radar will also deactivate if there is insufficient power in the base, however the data inside the Radar will remain unharmed until reactivation. Thus, all previously explored areas will be shown after the reactivation. 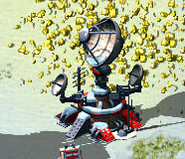 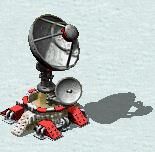 in snow theater
Add an image to this gallery
Retrieved from "https://cnc.fandom.com/wiki/Radar_Tower?oldid=226680"
Community content is available under CC-BY-SA unless otherwise noted.