Raid on Lost Castle is the first mission of the Soviet campaign in Command & Conquer: Red Alert 3: Uprising.

After the Soviet Union's defeat during the war, the Union was under the occupation of the Allies. European Union President Rupert Thornley assured the public that the Soviet people have embraced the Allies, and there is no evidence of an armed resistance despite rumours.

Unbeknownst to them, however, the Soviet Underground was gathering under the leadership of former intelligence officer Dasha Fedorovich, aiming to restore the Soviet Union.

Unfortunately, several scientists vital to the resistance's weapons development have mysteriously gone missing. Dasha believes that a recently discovered Allied research facility in Romania holds the answers to the scientists' whereabouts, and orders the resistance's latest member, a young field commander, to lead a small force into the area and investigate the facility.

The Conscripts arrived at Romania in a steamboat and were ordered to gather the recon teams, after which they were to bring the scientists back to the ship and return to Russia.

The Conscripts first engaged and slaughtered two Allied Engineers mercilessly, taking their anger at losing the war out on them. The squad quickly pushed through the docks, engaging Allied patrols consisting of attack dogs and peacekeepers. Fortunately, the patrols were unprepared for an attack and fell quickly, though not without some wounds to some unlucky Conscripts, who were forced to the back of the group, as the squad could not afford to lose a single man.

The Conscripts rushed over to the dock exit, while Allied forces were beginning to be warned of the attack. As a Javelin soldier attempted to distract the group with rocket fire, more quickly barricaded themselves in the buildings nearby. Fortunately, the Conscripts were armed with their burning Molotov Cocktails and burned the Javelin soldiers out quickly.

The Allies meanwhile had taken aware of the attack and sent a large force of peacekeepers to eliminate the rebels. Fortunately, the Soviet squad quickly divided itself and rushed into the buildings nearby. As the counterattack got close, the Conscripts began opening fire. Peacekeeper after peacekeeper fell as the Conscripts killed them effortlessly behind the windows of the building. The shotguns of the peacekeepers were very ineffective against the houses and eventually, the Allied counterattack was stopped.

The Conscripts immediately filed out of the buildings and stopped beside some medical supplies in a crate left behind by the Allies, taking a breather while their wounded comrades replenished their health.

The Conscripts made their way over a bridge nearby spanning over a ravine, where a fireteam of Javelin soldiers were stationed below. As the Conscripts passed over, the Javelin soldiers quickly moved to intercept them. The Soviets piled inside a nearby building again and eliminated a two man team from one side. From the other side, the other two Javelin soldiers themselves fortified a building. The squad quickly switched to their Molotovs again and threw them inside, burning the soldiers out.

After fighting some Allied infantry, they encountered one of the recon teams. They then had proceeded to the other recon groups, while fighting Allied tanks and infantry which were paradropped by Century Bombers. Finally, the group managed to encounter the third recon team and then have to pass through a lot of Guardian Tanks in order to get to the last recon group - the Desolators. At this time, Dasha remarks that their toxins are useful against infantry.

With all recon teams gathered, they proceeded to rescue the scientists. When they rescued each scientist, one of their rescuers told them the Allies had slaved them to develop a new kind of heavy artillery for them. When the group arrived at the center of the facility, there was a shocking revelation: this base is run by FutureTech Corporation!

But what exactly did they want with the kidnapped scientists for? Just as they were about to leave, FutureTech immediately countered the Soviets with Pacifier FAVs, which appeared out of nowhere and deployed their Grand Cannons to open fire. These apparently were the tanks the scientists had been forced to create. The Soviets and their scientists quickly ran for their lives. Fortunately, some of them escaped the Pacifiers and managed to arrive at the boat just when more FutureTech reinforcements arrived.

10 conscripts will be deployed to deal with the enemy infantry and the garrisons. Throughout the mission, the player will get flak troopers, tesla troopers, and the new desolator infantry which destroys all land targets. After rescuing the scientists the enemy will use Pacifiers to destroy the player's forces. DO NOT FIGHT THEM. Just get the scientists to the docks and mission complete. 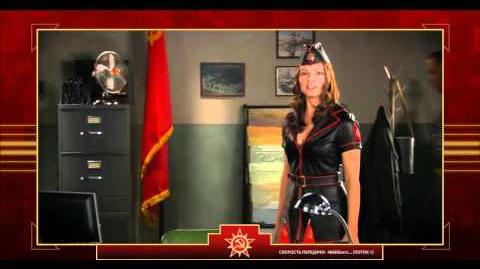 Retrieved from "https://cnc.fandom.com/wiki/Raid_on_Lost_Castle?oldid=240171"
Community content is available under CC-BY-SA unless otherwise noted.