The Cobretti AR-70 Raptor automatic rifle is the basic assault rifle of GDI and Nod in Renegade.

The AR-70 Raptor is a descendent of the assault weapons used by GDI during the First Tiberium War, and has been extensively modified over the years. Its fire rate, stopping power and magazine capacity have increased while its ease of handling and lightweight construction have remained.

In the latter years of the First Tiberium War, GDI's Board of Directors was becoming increasingly concerned with the direction the war was turning. Nod was quickly learning how to weaponize Tiberium, and the effects on the soldiers in the battlefield were horrific. Exposure to concentrated Tiberium radiation was killing soldiers faster than they could be replaced, turning many into semi-intelligent visceroids. Due to these terrifying complications, it soon became apparent that the infantryman needed a weapon that could engage the enemy before he could return fire, so the Corps of Engineers was ordered to tinker with existing weapons and create new ones.

Dipping into the massive surplus of weapons left behind by the dead and transformed soldiers, the Corps took the existing GEQ-8 assault rifle and made several major modifications. Drawing on the lessons learned from history, they stripped it down to its guts and practically rebuilt it from the inside out, replacing a number of parts with more advanced mechanisms. These modifications significantly improved its performance while leaving its weight and handling virtually unchanged. Thus, the battle-proven GEQ-8 was given new life, and redesignated the AR-70.

The Raptor is the basic automatic rifle used by Nod and GDI infantry in Renegade. It's quite useful against basic troops, but as more advanced units enter the playfield (SP and MP alike), it's usefulness diminishes.

Regardless, it is still a potent weapon when it comes to scoring headshots with it. However, it is only marginally effective against light vehicles and completely worthless against heavy armor.

The name Cobretti (presumably that of the company that manufactures the Raptor) is likely an homage the 1986 film Cobra, in which Sylvester Stallone plays a character called Marion "Cobra" Cobretti. 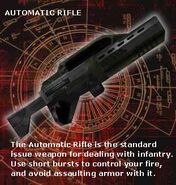 Retrieved from "https://cnc.fandom.com/wiki/Raptor_automatic_rifle?oldid=226560"
Community content is available under CC-BY-SA unless otherwise noted.