The Ravager is an elite assault "infantry" used by the Scrin. Hurling lethal shards of green Tiberium, they can quickly defeat most infantry and even threaten lightly-armored vehicles. While their Tiberium Agitation ability wreaks havoc on opposing economies by detonating Tiberium-based assets such as Harvesters. Like all Scrin infantry, they heal in Tiberium.

These creatures are quadrupedal biomechanical constructs that literally have green Tiberium crystals growing on them, and have been reported to be one of fastest Scrin units encountered to date.

The Ravager attacks by launching Tiberium shards at its targets at incredible speeds—an attack mechanism similarly observed, but even more potent than that found on Canis tiberius. It has also been confirmed to have the ability to detonate Tiberium via a reaction similar to the one caused by Nod's Catalyst missile.

Ravager squads under the Reaper-17 sect can be upgraded for even more potency, whilst those under the Traveler-59 are known to be enhanced with advanced articulators—increasing their speed to the point of being able to outrun most vehicles and infantry.

Ravagers come in squads of three, and are thus vulnerable to snipers, but do resist gun-type damage very well for an infantry unit. This modest feat, combined with their bonus damage versus vehicles—enables them to somewhat counter light anti-infantry vehicles such as Nod Buggies, Steel Talon MRTs and GDI APCs (unless loaded with Snipers).

Also, like most Scrin infantry: they are unable to garrison buildings and—unless upgraded with the Reaper-17 Blue Shard technology—their shards are only effective against light vehicles and infantry.

Their Tiberium Agitation ability however, is a very considerable threat—and just a few squads of them could easily cripple an enemy base's economy - easily destroying enemy Harvesters and Refineries, especially those fully-loaded with Tiberium. The ability also seems to work on any unit that contains Tiberium: like Marked of Kane Tiberium Troopers, and even hostile Scrin units: such as the Corrupter or the Tiberium-charging Devourer Tank—with devastating effects.

With their anti-infantry weaponry and detonation abilities, Ravagers can be be loosely considered the Scrin equivalent to Nod's Shadow Teams. 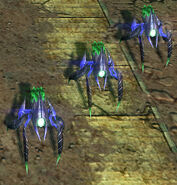 Ravager firing with the Blue shard upgrade
Add an image to this gallery
Retrieved from "https://cnc.fandom.com/wiki/Ravager?oldid=226428"
Community content is available under CC-BY-SA unless otherwise noted.