Can attack while moving.

Can't shoot directly under itself.

The Razorback is a rare GDI air unit in Command & Conquer: Rivals.

Designed from the guns out to be the ultimate anti-infantry aircraft, the Razorback provides GDI forces with precision strafing runs on soft targets with its twin 8mm rotating cannons. The Razorback can take advantage of its extremely agile design to maneuver around the battlefield and chase down escaping infantry units with ease.

The Razorback is the ultimate mid-game anti-infantry unit. Much like Chem buggy, it attacks while moving, but it moves over obstacles and ground units, making it almost a certain death for any unit from the Hand of Nod once the Razorback has closed the distance.

The ability to attack while moving allows it to stack with other units, thus increasing total firepower while staying safe. This requires careful management. This tactic works very well with Mohawk gunship, where both units together clear ground units without much effort and together will remove a squad of Attack bikes in seconds. Another option is to hide behind a shield of Missile squads, which can deal with most vehicles and aircraft, while the Razorback steps in to deal with infantry.

Even when pressured from the skies, can retreat to safety while still dishing out damage to units under.

The main weakness of the unit is aircraft and ground vehicles. It being a specialty unit it can struggle to find the role on the battlefield if the opponent is switching to non-infantry units. 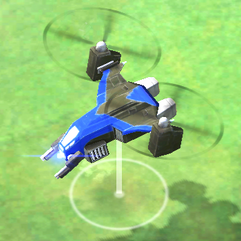 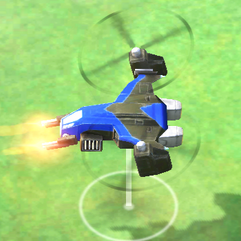 Retrieved from "https://cnc.fandom.com/wiki/Razorback_(Rivals)?oldid=240834"
Community content is available under CC-BY-SA unless otherwise noted.