The Reaper is a Nod Defense Class tier 1 infantry unit in Tiberian Twilight.

Prior to the Firestorm Crisis, the Reapers were largely a stuff of legend, rumour, with blurred reconnaissance images being the only proof of their existence. GDI InOps believed the photographs were doctored or were just images of a new Tiberium Lifeform.

However, in reality, they were images of a new Nod weapon - a semi-organic all terrain walker. Chosen mutants were cybernetically linked to a spider-legged chassis, controlled via a link tapped directly into the cerebral cortex of the subject. This weapon was still unfinished - Nod scientists were unable to solve problems of controlling four additional limbs through the neural interface - mutants were inevitably suffering catastrophic mental and physical damage. Most were reduced to a state of incoherent screaming madness, while those that didn't could not operate their limbs with any form of accuracy.[1]

The issue was simple - biofeedback from double the standard amount of legs was too much for the operators to handle, resulting in Reaper candidates crashing into walls (or through them), at war with their own limbs or overwhelming the cerebral cortex, to the point of brain death. Nod was not one to squander investments, so all victims were transferred to cybernetics divisions for further experimentation - in fact, these experiments on clinically dead mutants led to the pervasive rumours of Nod scientists trying to raise the dead, to create the Marked of Kane.[1]

It took CABAL's mutiny to discover a fix for this control problem - once all semblance of free will was purged from the host, the Reaper changed from a curious experiment into a battlefield machine. However, strain put on the AI's resources by combined GDI/Nod resistance led to the new walker being significantly underused, not to mention persisting problems with maintaining control over large numbers of Reapers simultaneously, which caused them to occassionally collide with each other, trample other units or get stuck in problematic terrain.[1]

It was not until LEGION was born and merged with the Tacitus that the control problems were solved and a new version was introduced. Utilizing data gathered from Scrin biomechanical exoskeletons (Annihilator tripod most notably), a new solution for handling the biomechanical feedback was implemented. Drawing from a pool of seasoned veteran cyborgs of the Marked of Kane, the next generation walker is a force to be reckoned with.[1]

The Reaper is a powerful cybernetic warrior armed with an integral arm-mounted laser. The design is an adapted version of the Reaper Cyborg used by CABAL during the Firestorm Crisis, whose ranks draw from seasoned, veteran cyborgs of the Marked of Kane.[1]

It's primary armament is the Multiple Objective LASER System, linked directly to the unit’s cybernetically enhanced cerebral cortex, allowing near instantaneous acquisition – and subsequently, destruction – of multiple targets, even on a crowded battlefield.[1]

With the Dark Armaments upgrade, Reapers gain an additional laser in the form of a mini Obelisk of Light attached to their backs, and the lasers can prism to hit multiple targets.

Additionally, the cyborgs have an in-built monitoring system, that continuously monitors their status via a network of nano-sensors implanted directly into the nervous system, allowing for the immediate analysis and treatment of any battlefield injury, down on molecular level. This system can seal damaged flesh and temporarily reroute systems, until damaged systems can be repaired. This has led to numerous stories of damaged Reapers rising from the dead in working order, to the detriment of those careless enough to stick around supposedly destroyed units.[1]

They are rather slow-moving, but can be very powerful, especially when garrisoned in Reckoner APCs. Since they are only 3 CP, they can be mass produced, so that a commander with no other units can have up to 16 Reapers in a 5v5 match. In these numbers, they are not only capable of destroying a Kodiak in seconds, they can also effectively hold their ground against medium targets, though not as much against light targets. When engaged by Reapers, the ideal counter would be the GDI Zone Enforcer or Bulldog, due to being the 'hard counter'.

A groups of upgraded Reapers firing it's lasers 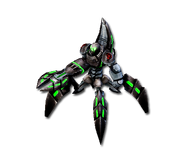 Retrieved from "https://cnc.fandom.com/wiki/Reaper_(Tiberian_Twilight)?oldid=233937"
Community content is available under CC-BY-SA unless otherwise noted.