The Reaper is a Soviet mechanized walker, the predecessor of the Sickle, deployed during The Uprising.

There is a popular postwar saying in the Soviet Union that translates to, "Hey, we tried." It was first uttered by a team of Sickle gunners on their ignoble return to base after the Allies' surprise siege on the former Premier's fortress at Leningrad. This led to a series of feel-good propaganda printings from the dismantled Soviet government to its shaken people (essentially an extravagant get-well card that cost the nation half of its remaining treasury). The image of a Sickle personified as a very sad-looking and bruised ice hockey player, with tears in its eyes and with one of its legs in a cast, became iconic throughout the war-torn Soviet Union. But even though thousands of Sickles met their crushing defeat in the war, this did not stop the Soviet Ministry of Experimental Science from refurbishing an older and less reliable prototype in an effort to maintain a modicum of defensive capability, and to remain solvent as a business. That prototype, commonly known as the Reaper, was initially assumed to have only a fraction of its better-known cousin's power and maneuverability, as well as a crippling design flaw in its legs... a prime example of the self-deprecating "Hey, we tried" attitude so prevalent in the U.S.S.R. But if the latest reports are to be believed, the Reaper is no laughing matter.

The Reaper is like a bigger, burlier version of the Sickle. Instead of the Sickle's signature heavy machine guns, the Reaper features three independently-articulated grenade launchers. In addition to that, a swivel-mounted rocket launcher is mounted to the top of the Reaper's canopy, and its tracking system turns out to be sophisticated enough to lock onto fast targets such as aircraft. Furthermore, the Reaper is built from a similar alloy to Soviet main battle tanks, so in spite of its somewhat clunky appearance, it is sturdier than the Sickle. If all this is to be believed, then the question becomes, why did the Kazminov Design Bureau (the Sickle's manufacturer) favor the less-powerful model and throw the other one away? One theory is both cynical and steeped in stereotype: The Soviets like cutting corners. The Sickle was cheaper to produce in bulk, and the Reaper had a few kinks not found in its lighter, quicker relative. So the Sickle went into mass-production, while the Reaper was sold off to the Ministry for a cheap sum.

The Ministry of Experimental Science resuscitated the Reaper out of necessity, but has not yet been able to address its primary flaw: Its multiple weapon systems are too heavy for its spindly legs. This not only means the Reaper moves at a lower speed in comparison to the Sickle, it also means its legs are less than reliable. Much like its cousin, the Reaper is capable of leaping long distances due to the powerful, pressurized pistons in its legs. Unlike its cousin, however, the Reaper seems unable to execute a proper landing. In more than 99 percent of tests, new reports show, the Reaper winds up landing so hard from any attempt to jump that its legs snap off underneath it, and the Reaper's canopy winds up half-buried in the ground. Unlike Sickle gunners, who tend to take pleasure from leaping their vehicles to and fro, Reaper testers have reportedly grown fearful of having to use the vehicle's jump capability because of how painful the landings are.

Apart from that one problem, the Reaper now appears to be a very capable multipurpose combat vehicle. Of course, the demilitarization of the Soviet Union means there should be no combat-certified vehicle operators available to use the things, and the Reapers themselves should be in relatively short supply. However, the ongoing tests conducted by the Ministry must mean a certain number of Soviet citizens are familiar enough with the Reaper's quirks and specialties that they could, in theory, represent a threat.

Battlefield reconnaissance has revealed at least these facts about the Reaper:

• Bristling with weapons -- The Reaper hails from an age of Soviet excess, which is why it's loaded down with so many explosive weapons. Its three fast-firing grenade launchers and top-mounted rocket rack are almost excessive in their stopping power, and let the Reaper attack both surface and air targets.

• The price of punishment --Because it is available in relatively short supply and packs so much firepower, the Reaper is fairly expensive to produce, even more so than a Soviet main battle tank. While most Soviet forces are considered to be specialized and efficient, the Reaper can be seen as something of a jack-of-all-trades, but while being a jack-of-all-trades, it is very effective in doing it's job.

• The questionable proto-jump -- Much like the Sickle, the Reaper is capable of leaping long distances. Unlike the Sickle, the Reaper only gets one shot at this before its legs inevitably break, turning the thing into a makeshift defensive turret. Being much heavier than Sickles, Reapers can crush almost anything they land on, making the benefits of the proto-jump potentially outweigh the consequences... and making it the ultimate MCV killer.

• The steadfast Reaper-turret -- Once legless, the Reaper remains fully operational apart from its lack of mobility. It can still attack in any direction, and because the jump landing tends to bury the Reaper's canopy halfway into the ground, its defenses are bolstered in this state.

The Reaper concept was primarily meant for Red Alert 2 (it was called a Centurion), but it never saw the final version. It had three legs instead of the Reaper's four.

The Reaper can still crush units even if it is shrunk and even smaller than the target vehicle. This means that it can humorously crush units like the Shogun Executioner, King Onis, Apocalypse tanks, etc. 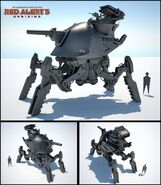 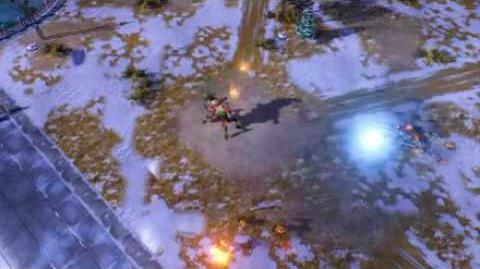