An upgraded version of the already fearsome Annihilator Tripod, Reaper Tripods are even more dangerous thanks to Tiberium-charged weaponry. Standing tall on three legs, the menacing Reaper Tripod sports three "arms" each armed with a deadly energy beam capable of slicing through the thickest armor. If it closes in, the Tripod can EMP any vehicular or structural target. For added protection, Reaper Tripods can also be upgraded with Scrin energy shields. Reaper Tripods can also charge their weapons on Tiberium for added firepower. Once destroyed, Tripods leave behind Husks that can be recovered by any commander.

This unit is a mutation of the Annihilator Tripod, a result of the Reaper's excessive Tiberium infusions. The Reaper Tripod eclipses the normal Annihilator due to its ability to absorb Tiberium to enhance its conversion beams, similar to the Devourer Tank. This weapon can be upgraded with Conversion Reserves to accommodate more Tiberium. 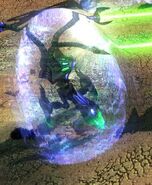 Firing
Add an image to this gallery
Retrieved from "https://cnc.fandom.com/wiki/Reaper_Tripod?oldid=237571"
Community content is available under CC-BY-SA unless otherwise noted.