Rebels were the GLA's basic soldiers of during the War against the GLA. Lacking the more advanced weapons of their counterparts, rebels were inexpensive and quick to train. Armed with AK-47 assault rifles, these dedicated men made up for their lack of training with raw courage.

Although outmatched by both the Ranger and the Red Guard, the rebel is expendable and works well when attracting enemy fire. His firepower can also be improved by purchasing the AP bullets upgrade at the black market, making the rebel more useful on the battlefield. However, given the GLA's production system, rebels are trained at a slower rate than even the Red Guard, making GLA less viable in the early game while controlling oil derricks.

They are also arguably the weakest of the three basic infantry units. Rangers have superior durability, while the Red Guard have a one-shot burst weapon in contrast to the rebels who fire three shots (each with one third of the damage value), allowing a lone Red Guard to beat a rebel one-on-one. In addition, rebels have no way to increase their battle prowess at the early game - the only way to increase their direct battle power is by using AP bullets, a late-game upgrade, while the Rangers have the flash-bang grenades and the Red Guards the horde bonus. Like all infantry units, rebels are easy targets for anti-infantry weaponry.

Because of the GLA's lack of power (rendering them in effective low-power status), having a source of power doubles the training speed of GLA units, including the rebels to put them in par with Rangers.

However, Juhziz' rebels are deadly even at later stages of the game once the demolition upgrade is purchased. This is particularly true of rebels spawned by Rebel Ambushes, as they can then be quickly deployed to destroy key enemy structures.

Dr. Thrax equipped his toxin rebels with toxin rifles instead of AK-47s. They could clear garrisoned buildings and deal more damage to infantry and vehicles, but were ineffective against buildings. They could not place booby traps and could be upgraded with Anthrax Gamma.

In the mission Area Fifty-Two, they were cheaper ($150 instead of $200), could place booby traps, were immune to toxin weaponry and were, by mistake, referred to as regular rebels.

Prince Kassad's stealth rebels are already stealthed and do not require the camouflage upgrade.

In the mission Hidden Agenda, their cost is reduced to $150. 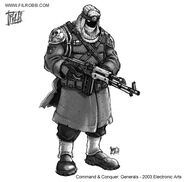 Censored German icon
Add an image to this gallery

Retrieved from "https://cnc.fandom.com/wiki/Rebel_(Generals_1)?oldid=231264"
Community content is available under CC-BY-SA unless otherwise noted.