Red Alert: Origins is a Starcraft II mod that brings back Red Alert 1 to an updated RTS engine. Origins is being created by Sourc[e]x alone, a Norwegian 3D generalist and long time game modder.

Red Alert: Origins will have a open beta testing period to gather as much feedback as possible. The opening date for the beta has not yet been decided.

It's 1946. Mankind has just gone through one of the most brutal wars it ever faced. At the Trinity site in New Mexico, in an attempt to prevent the war from ever taking place, Albert Einstein created the Chronosphere time machine.

Traveling back to Landsberg, Germany, he met a young Adolf Hitler just after his release from Landsberg Prison. Following a brief conversation between the two, Einstein shakes Hitler's hand to cause a reaction that eliminated Hitler's existence from time by disturbing the space-time continuum. This prevented Nazi Germany from forming and averted World War II as we know it from taking place.

Without Nazi Germany to stand in the way of Joseph Stalin's ambitions of conquest, the USSR tries to form a Soviet Union stretching across the entire Eurasian landmass. In response, the nations of Europe form into the Alliance, and start a grim and desperate guerrilla war against the invading Soviet army.

And so, in spite of our dearest scientist's efforts, a new World War starts. 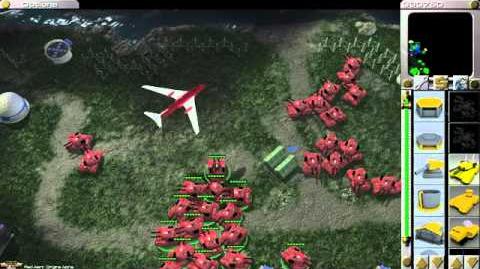 Retrieved from "https://cnc.fandom.com/wiki/Red_Alert:_Origins?oldid=209694"
Community content is available under CC-BY-SA unless otherwise noted.