A Reinforcement Bay is a neutral and campaign-only tech structure in Tiberium Wars which provides the faction that captures it with random reinforcements in the form of infantry or vehicles.

A development of the Global Tunnel System, a Reinforcement Bay is an access point of the system. It is basically a structure that, when activated, becomes a "destination point" for any mode of reinforcement transportation. Units carried there are protected and prepared within its hangar before being deployed. By default it remains sealed and refuses all access to the system; but when a qualified utility infantry unit gains entrance, it can be opened and used to deploy reinforcements to the battlefield. This is a logical expansion of bridge reparation (used by Nod to deploy reinforcement) and dropships, as both used during the Second Tiberium War. It will deploy any unit available to a common production facility from the capturing faction. This structure is useful for deploying fighting units to assist in the mission where usual production facilities are unavailable in the current battle.

They were utilized numerous times during the Third Tiberium War. One can be captured by Nod at Goddard Space Center to bring in more militants and vehicles. GDI made extensive use of a series of bays when they assaulted Nod stockpiles in Albania and Cologne, while Nod utilized them in Italy and Brazil. 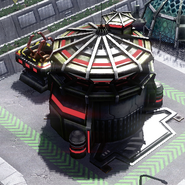 Reinforcement Bay captured by Nod
Add an image to this gallery
Retrieved from "https://cnc.fandom.com/wiki/Reinforcement_bay?oldid=214640"
Community content is available under CC-BY-SA unless otherwise noted.