Rescue Tratos is the fourth GDI mission of Tiberian Sun. It involved a GDI operation to free the Forgotten leader Tratos from a Nod hospital/test facility and then to destroy all Nod forces in the area.[1] 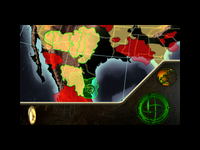 Nod is experimenting on mutant survivors at a facility in this sector. Among them is Tratos, leader of the mutants. Using Umagon's strike team, rescue Tratos from imprisonment and EVAC him at the specified site. Once complete, move in with GDI forces and destroy the Nod base and the prison test facility.

During the campaigning in the south-western United States against Nod forces at the start of the Second Tiberium War, Michael McNeil had secured control of a crashed, apparently alien ship on the Texas-New Mexico border. He was then forced to defend this prize against a ferocious Nod attack.

Afterwards, while ﻿McNeil was inspecting the crashed alien ship, suddenly Umagon attacked them. Yet upon capturing McNeil the mutant female revealed that she had information regarding General Vega's main base. However she would only reveal it to him if GDI consented to rescue the Forgotten leader, Tratos, held against his will in a hospital facility in Mexico that was involved in Nod research projects into Tiberium mutation.

McNeil agreed to this deal and having already secured control of the south-western United States; the GDI were now ideally positioned to launch an offensive into Mexico and release Tratos. He was advised however that the operation would rely on stealth in order to succeed and thus he would do well to eliminate the sensor net protecting Nod Mexico from infiltration by GDI forces first.

﻿The rescue was to be carried out by a small team of Forgotten, consisting only of Umagon, a Ghoststalker and a Mutant Hijacker. Any greater force could not be deployed unnoticed and being detected would lead to Nod either killing Tratos or moving him to a more secure location.

Along the way the team may have befriended a Tiberian Fiend which would then have helped the team eliminate a small Nod outpost at the bridge to the hospital base. Once at the hospital base's perimeter, the mutants could have then destroyed ammo crates to create an explosion that would have destroyed the laser fences and allowed them to bypass the base's laser turrets. The hijacker could also have stolen a Tick tank or one of the Attack cycles lying idle close to the Nod bridge outpost and used it to destroy the ordinary fencing around the outpost allowing them to avoid the the outpost's laser fences.

Once the team had infiltrated the hospital facility base, the alarm was raised and they had only a limited time to rescue him before Tratos was executed; but they were still able to get Tratos out of the hospital before this happened and blow up the facility in the process.

The commando team then escorted Tratos out of the premises to the evacuation point, a small civilian village where an Orca Transport and three Wolverines were waiting for the team. The team rushed to the transport before Nod could destroy the ship and safely extracted themselves out of the area along with Tratos. The Wolverines however were left behind to take part in the assault.

The GDI assault force arrived in the north-east and McNeil established a base aiming to put and end to Nod operations in the area. Although the hospital/lab itself had been destroyed there was still a major Nod base nearby, waiting to be﻿ put out of commission.

Nod detected this force and conducted raids against the GDI position. At the same time the Forgotten released Tiberium Fiends on the other side of the river, which destroyed the remaining buildings in the small hospital research facility base. They did not provide much help aside from this however and the main Nod base was left entirely to the GDI forces.

While the Nod main base was heavily defended with Tick Tanks and laser fences, there was a back door to the base used for Tiberium harvesting operations that was lightly guarded in comparison. In order to fully exploit this, GDI could have sent forces through the Tiberium fields and attacked the base's weak point while ideally eliminating the Harvesters first to deprive it of resources.

McNeil's forces were able to prevail against the Nod base, utterly eliminating all remaining Nod structures in the area, all the way down to the laser fences. Having done so, the GDI were now unquestionably in control of the entire area.

With the destruction of the Nod base at Tampico, the GDI swiftly established control of the relatively flat area of coastal Mexico in the vicinity. They were now in an ideal strategic position to continue their grand offensive through Mexico and into Central America.

This was just as well, for in return for having released Tratos; Umagon released the location of Vega's main base to the GDI. It was on an island off Honduras in Central America. McNeil could now take the fight to Vega personally.

The SAM defenses defending the island base however were a problem, although the GDI could easily use the element of surprise to land a small force of infantry on the shore; without eliminating the air defenses they would not be able to safely land reinforcements or even establish a base.

McNeil was therefore advised to wait for the opportunity to strike at the dam that acted as the power source for Vega's base; as with the power down the air defenses would be temporarily neutralized and the GDI would be able to land their forces safely.