The Rhino heavy tank was the main battle tank of the Soviet Union during the first and second iterations of the Third World War, replacing the aging heavy tank.

The Soviets mass-produced Rhino tanks to swarm the United States, hoping to win through sheer numbers and weight of firepower. It is possible that following this concept, the next stage became the Apocalypse tank, derived from the Rhino but is bigger, heavier and carries more weapons. Of all the basic tanks, the Rhino was by far the strongest in terms of raw firepower and armour. The notable difference between it and its predecessor is a single, large cannon compared to dual cannon turrets seen on the heavy tanks of the Second World War. These changes may come from consideration that constructing a single-barrelled, but powerful tank was much more practical in contrast to the mechanical difficulties of constructing a dual barrel turret on a compact designed medium tank chassis.

Rhino tanks were heavily armoured and mounted a large 120mm gun, at a slight cost of speed in the process. Despite the fact that it was slower than its two counterparts, it was still sufficiently fast for a heavy tank, being able to mobilize quickly from one location to another. Its speed deficit in comparison with its counterparts were not as pronounced as the heavier Apocalypse Tank; it is believed that the Rhino's speed was only roughly 15% less than the Allied Grizzly tanks top speed and still 50% faster than the Apocalypse tank.

Rhinos formed the bulk of the frontline vehicles fielded during the war. Like most other tanks it was capable of grinding infantry under its treads and was good at shelling buildings in groups. Soviet high command deemed the Rhino tank worthy of mass production, deploying it throughout the Soviet Union and to nearly all major battlefields during the war. While dwarfed in terms of power by the high tech Apocalypse Tanks, Rhinos remained a major asset to the USSR in all of Third World War major conflicts, using mass attack tactics to win the day. This tactic became even more viable with the invention of Industrial Plants, which allowed the tanks to be churned out at a much faster rate and, in the process, gave the Soviet Army many chances to both outgun and overpower their enemies.

The Rhino tanks are very useful in early game stages due to its cheap production cost and medium-high power against vehicles and structures. The Rhino tanks are especially useful in a Soviet vs Allied PVP match: during very early games, the player controlling the Soviet faction could easily build few of these tanks and defeat the Allied player if these tanks are focused on destroying enemy structures, as the Allied player spent much time in early game to develop his/her base. This tactic is called 'rushes' and are usually used by Soviet players early in game. Even in late-game matches, the Rhino retains its usefulness due to its high speed, heavy armor, and relatively inexpensive cost (especially if an Industrial Plant was constructed).

Despite its relatively strong armour, Rhinos had no effective response against aerial threats,, being unable to hit them. Sometimes, a lucky Rhino could dodge missiles launched by Harriers or Black Eagles, but this required precise timing. Against Rocketeers, Rhinos were completely helpless. The German Tank destroyer was also more than a match for it, possessing much greater firepower, and costing the same amount of resources as the Rhino.

Rhinos were more expensive to produce then the Grizzly battle tank or the Lasher light tank and was often outnumbered by the smaller tanks. However this can be remedied with the Industrial Plant. Even though the tank is fast, faster tanks can close in on Rhinos for the kill if not managed properly. Large groups of deployed GIs could wear down Rhinos due to its lack of anti-infantry weapons, but the tanks themselves could easily grind the infantry under their treads if they were not destroyed in the process.

After the defeat of the Soviet Union the Allies developed the Guardian GI which can hard counter main battle tanks such as the Rhino easily and much more effectively, especially if bunkered in an IFV or even the new Battle Fortress. Even on their own, Guardian GIs can still pose a huge threat. With the new steel encasements in deployed mode, running over Guardian GIs is no longer an option and the Guardian GI has the range to get a few shots off before the tanks have the range to attack them, giving the Allies an impressive and needed boost in defensive situations. During the Psychic Dominator Disaster, Guardian GIs were brought back in time and Rhinos had to overcome these challenges.

Following the Psychic Dominator Disaster, the Soviet Union replaced Rhino tanks with cheaper Heavy tanks during the Post-war Crisis. That design was later replaced by the more powerful Hammer tank during the War of the Three Powers.

Rhino Tank in an installer slide, with the wrong Allied background.

Rhino Tank as seen in the invulnerability activation icon for the Iron Curtain. 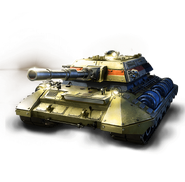 During the development period of Red Alert 2, the Rhino tank changed its design several times, resulting in inconsistent appearances in the final release of the game.

The tanks seen moving into Colorado Springs is higher, with no apparent fuel tanks in the rear and has a different turret. And what seems to be four treads instead of two. However, the Rhino in the installer slide has a larger turret and a longer barrel.

The in-game voxel looks like a mix of both, having the fuel tanks and the height of the tank in the installer slide while appearing to have a similar hull design to those seen in Colorado Springs. The turret however is different as it is larger and positioned more to the rear (when viewed from certain angles), which could be an unintentional oversight.

A stock Merkava model was used for the alpha cameo. The beta cameo appears closest to the in-game voxel, but was changed again for the final release, resembling the installer model more.

Retrieved from "https://cnc.fandom.com/wiki/Rhino_tank_(Red_Alert_2)?oldid=240776"
Community content is available under CC-BY-SA unless otherwise noted.