The Rhino tank is a heavy tank that was supposed to appear in the second version of Renegade 2.

A heavy duty cannon mounted on a tracked chassis, the Rhino is the younger brother of the original Rhino tank used by the Soviet Union.

The vehicle was supposed to appear in Renegade 2, but with the change of focus and later cancellation, it never made it past prototype stages. 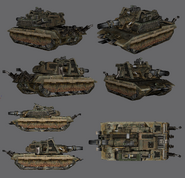 Model Render
Add an image to this gallery

Retrieved from "https://cnc.fandom.com/wiki/Rhino_tank_(Renegade_2)?oldid=229294"
Community content is available under CC-BY-SA unless otherwise noted.