Ricardo Vega is the protagonist of Tiberium.

He is the son of GDI officer Javier Vega and a nephew of Nod's General Vega. He wanted to become a soldier, following in his father's footsteps. His father only allowed him to join the GDI military after he promised to obtain a university degree. (He has a degree in history.)

Vega has a natural talent at shooting, very good at running and is an amazing pro poker player. He has a "freakishly" large head, which has caused him equipment problems.

Vega joined the elite 22nd Infantry Division after his military training was complete, with the rank of private. His famous father caused him plenty of problems: several of his fellow soldiers (especially Tera Gallagher, who was promoted at the same rate Vega was) believed he was able to join the elite division only due to nepotism, despite his very high training scores. His tough but fair superior officer, Hastings, treated him the same as any other soldier. Gallagher gave him the nickname 'Puke' after he pulled a prank on Golden, a soldier who was a notoriously paranoid hypochondriac, and gave him pills that caused him to vomit. Initially, Vega hated this name, but later he chose to keep it because it reminded him of Golden, who had died in battle.

Vega had joined the Division the same day that Nod unleashed a devastating attack against the Philadelphia. He was in a real war now. His first assignment was to help repel a Nod invasion of San Diego. The invasion was small, but Nod managed to capture an important GDI scientist, Joseph Takeda, putting him under the control of Captain Al-Rashan, a skilled interrogator. Due to helmet problems because of his large head, and some luck, Vega saw and stopped an ambush. With his natural shooting talent, Vega and his friend Private Alessio "Dish" Bowles recovered the scientist and captured two Nod personnel, Corporal Hugh Isembi and Private Voyskunsky. For these actions, Vega was promoted to Sergeant. This was a startling promotion, one that Vega was not entirely ready for. Battle Commander Michael McNeil promoted Vega because so many sergeants had died, because GDI needed heroes, and also because he respected his father. Major Hastings was not happy about this, as McNeil didn't have a full understanding of the role luck and natural talent played in Vega's heroics (compared to his soldier skills). 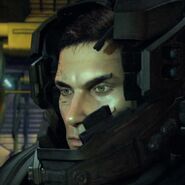 Vega with other Commandos

Concept art by Takayoshi Sato
Add an image to this gallery
Retrieved from "https://cnc.fandom.com/wiki/Ricardo_Vega?oldid=230725"
Community content is available under CC-BY-SA unless otherwise noted.