The rifleman squad is the main infantry unit of the Global Defense Initiative in the events from Tiberium Wars and Kane's Wrath.

Armed with automatic GD-2 rifles and standard GDI body armor, these six men squads are well trained and equipped. Every soldier carries with him a portable shovel, used to create foxholes on the battlefield.

Riflemen have access to advanced Composite armor suits or Tiberium field suits that provide them with better protection. On the battlefield, they maintain their fitness by doing push ups, usually in sets of five or so.

Like all GDI infantry, they can be shuttled around the battlefield in the V-35 Ox Transports. Some infantry squads are members of elite GDI Airborne divisions.

Rifleman Squads are GDI's counterpart to Nod's Militants and the Scrin's Buzzers. Riflemen cost 300, as opposed to the 200 credit cost of their counterparts. They have more firepower as well and tend to last longer in battle. Their squad size is smaller than a Militant squad, at only 6 soldiers instead of 8, making them more vulnerable to snipers and sometimes to area attack as well. However, each soldier has more health, increasing their chance of surviving being hit by a highly damaging attack. Keep in mind that in Kane's Wrath, Riflemen are inferior to the Black Hand subfaction's Confessor Cabals, who are the deadliest of the basic infantry units.

Unupgraded Riflemen can defeat unupgraded Militant squads efficiently. However, with the Confessor upgrade Militants can often defeat riflemen, since their Confessor squad leader is particularly strong and also possesses the ability to throw Hallucinogenic Grenades which can turn the Riflemen against each other. Militants can also get the Tiberium Infusion upgrade cheaply and early on, which further bolsters their health and makes them tougher than Riflemen. However, once Riflemen get Composite Armor or Tiberium Field Suits (ZOCOM only), they gain a large health bonus and become much harder to kill, evening the odds.

The Armor-Piercing Ammunition available in Kane's Wrath significantly boosts the damage of Riflemen squads and turns them into one of the most effective counter-infantry units on the field, being cheap, disposable, but good at killing enemy infantry and decent at damaging light vehicles. Combining this with Composite Armor or Tiberium Field Suits makes them very durable as well, being good at ranged combat in general, though still vulnerable to being crushed.

Buzzers, like with most infantry, can instantly kill a Rifleman squad once they get on top of them. However, Riflemen can easily dispatch a single Buzzer unit if they are provided enough range between them and the target, so they tend to only be vulnerable to large groups of Buzzers.

They can also build garrisonable Foxholes, where infantry can garrison for a defense bonus. Unfortunately, it costs 100 credits to create a foxhole, takes time to build, and Foxholes are vulnerable to anti-garrison weapons like flamethrowers, grenades and Buzzers. 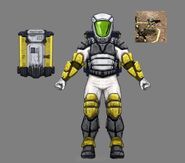 A Rifleman squad firing
Add an image to this gallery 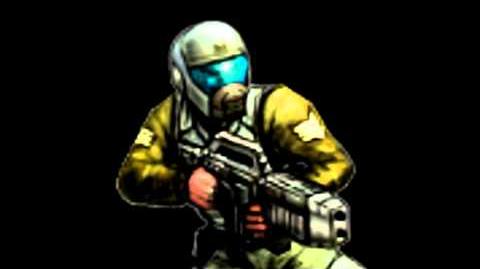 Retrieved from "https://cnc.fandom.com/wiki/Rifleman_squad?oldid=237512"
Community content is available under CC-BY-SA unless otherwise noted.