To acquire and level up units, the player needs to acquire in-game currencies like diamonds, fuel, credits, experience and cards. These can be used to get chests and cloning labs.

This is the most versatile currency in the game. This is the only in-game recourse that can be bought using real world currency.

Diamonds can be acquired from:

During one month the player can reasonably acquire 1500

Diamonds can be spent on:

The main use of credits is to train up units, but they can also be used to buy various in-game items

Credits can be acquired from:

Credits can be spent on:

Fuel is used for ordering convoy, speeding up convoy and getting new bounties.

Fuel canisters can only be obtained by playing games on ladder or events. 1

for a playing a match, 2

for a victory. Payer can store up to 10

is most important for new players, as it's used to level up. New levels unlock units, commanders, factions. New levels also grant cards and credits.

Experience can be acquired from:

Crates are a major source of credits, cards and diamonds in the Rivals game. The the amount of diamonds and credits are randomized. The type of cards are know, but which units those cards correspond to is not reviled.

The Vault is a unique object found in the Crates tab of the store that is only available for a limited time. Each time you open a crate, cards will be added to the vault. All crates you open will fill The Vault with cards, but higher value crates will grant more cards[1].

Game has several items that can generate cards and credits. 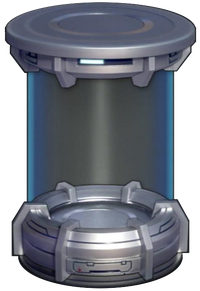 A cloning chamber can multiply existing cards.[2] The card that is put into the chamber can be used to level up units even when cloning is in progress. Upon finishing the cloning the original card is not destroyed, but the Standard Chamber is destroyed.

One cloning session takes 72 hours, but each battle played in an event or on ladder reduces the time of cloning by 4 hours. The Free Chamber can be used once every 24 hours, this means that it takes 12 battles to fully utilize the Free Chamber.[3]

The boosts are an extra rewards that are rewarded for playing ladder and event matches. The rewards are credit boosts and experience boosts.

When playing a battle, the game rewards the player with 50

. Every day the player is given 10 daily bonuses with +50

Through events and recourse shop the player can acquire additional boosts[4]:

The convoy is a regular, pseudorandom supply of crates. It provides common, uncommon, rare and epic crates. To a next crate, player has to pay 1 fuel canister and the crate will be delivered in 7 hours. The crate can be rushed by paying additional fuel canister and the crate will arrive 4 hours sooner. Then to get it instantly, player can pay with diamonds (50 diamonds for 3 hour rush, the cost goes down with time, the last 5 minutes can be rushed for free).

Contains the same amount of cards and credits as an epic crate, but the cards are only for a certain faction.