The Robot Tank was an Allied unmanned combat vehicle deployed during the war against Yuri's forces.

The result of Allied research into anti-tank technology, the Robot Tank is capable of hovering, allowing it to move over water. Being robotic in nature, it is immune to psychic powers, but also cannot gain veterancy. Also, it requires a Robot control center to function. If a control center is destroyed or low on power, all robot tanks under its control will become disabled. The Robot tank was erased from the timeline when Einstein is erased from history.

The first of the main advantages of the robot tank was that it could not be mind-controlled. It was mainly designed to function as a tank hunter, being equipped with a powerful cannon as its primary armament. However, it had little armour. Another feature of the tank was that it ran on an advanced hover drive system, allowing it to move quickly, and also navigate over water. The other advantage is because the tank was stripped down to the essentials, and did not have its own heuristic-based computer to guide it, the tank itself was fairly inexpensive, making it easy for large quantities of robot tanks to be manufactured. As a result, the tank can be well suited for hit-and-run attacks provided the commander can get around its vulnerable armour.

Robot tanks had no anti-air defence. Furthermore, their armour was fairly thin. Accordingly, robot tanks could not give much in the way of a stand up fight against most enemy forces. Furthermore, the robot tanks were merely the extensions of the robot control center - the tanks themselves did not possess any intelligence. As such, if a robot control center was destroyed or shut down for any reason, the robot tanks would also shut down. If the center later came online, then the tanks would power up again. Any tanks that happened to be over water when the center was disabled would of course sink, and could not be activated again.

The AI usually attack with 6 Robot tanks. They prioritize enemy vehicles above all other targets, and will bypass all other types of enemy buildings and troops while any vehicles remain on the battlefield. This is true even if they are under attack by enemy infantry or base defenses. If all vehicles are destroyed, they will continue to attack any other defenses.

Once they are all destroyed, Robot tanks become like any other troop with no preferred target; they will attack the nearest building to them regardless of type, and will turn and attack enemy units if they become aware of any nearby.

Robot Tanks sink instead of exploding normally if destroyed by a Giant Squid. 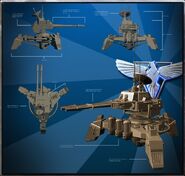 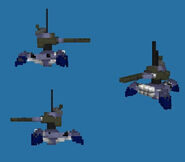 Retrieved from "https://cnc.fandom.com/wiki/Robot_tank?oldid=243318"
Community content is available under CC-BY-SA unless otherwise noted.