Rocket Angels are elite flying Imperial infantry during the War of the Three Powers and The Uprising.

Rocket Angels are, in every sense of the word, the shock troopers of the Empire of the Rising Sun's army - they are female soldiers, armed with Photon Rocket Launchers that is effective against enemy vehicles and structures, equipped with an advanced exoskeleton suit that grants them flight capabilities - identical to the Allied Rocketeer used in the Third World War (which were erased from the timeline) - and an ability known only as the Paralysis whip that, when activated, wraps around the selected target, preventing it from functioning. Unfortunately for the Rocket Angel, she is ineffective against infantry and is vulnerable to enemy anti-air defences, namely Apollo Fighters, MiGs and their own Jet Tengu fighters, not to mention the Magnetic Satellite superweapon.

To the uninformed observer, the Empire of the Rising Sun appears to be deeply stratified along class and gender lines, leaving one to assume that such a regimented society would never deign to permit women to assume the mantle of warrior and engage in frontline combat. That assumption, however, could not be further from the truth. We now know that, --more than ten years ago, acting on the counsel of his forward-thinking son Tatsu, Emperor Yoshiro saw fit to establish the Imperial Women's Warfare Academy deep in the heart of Hokkaido, with the goal of training the Empire's finest and fittest female subjects in both traditional and new ways of battle. Segregating the academy by gender was said to ensure proper focus and discipline.

Although presented to the public as a return to the highly-trained female polearm cavalry of the Empire's storied past, this societal shift proved to be quite controversial amongst the Emperor's more-conservative subjects, with many families of note forbidding their daughters from taking up arms and enlisting (not that they necessarily would have been accepted into the IWWA anyhow). Expressing frustration at this publicly, Crown Prince Tatsu took it upon himself to intervene. Soon after, dissent was quelled and the ranks of the Academy began to swell with driven young women, eager to learn the ways of war.

As disapproval turned to fascination, legions of cynical journalists, inspired schoolgirls, and heartsick young men formed encampments around the Academy's impenetrable walls, waiting in the vain hope that they would catch brief glimpse of the women training within. Public expectations soon grew to a fever pitch, fuelled by the massively popular weekly manga series "Flying Girl Azami" and its accompanying television series. When, the public demanded, would the gates of the Academy finally open? When would the fruits of the Emperor's labor be revealed?

"Soon," was always the answer. And after eight years, the doors of the Academy finally opened. But what awaited the frenzied public proved to beyond anyone's expectations: These doors, it turned out, were on the Academy's roof.

The eager young girls who had entered the Academy so long ago now emerged as formidable women, battle-ready warriors armed to the teeth and trained within an inch of their lives—the Women's Elite Aerial Infantry Division, soon to be christened by an excited public as the "Rocket Angels." Instantly recognizable for their state-of-the-art, color-coordinated flying battlesuits, shoulder-mounted swarm-pods and the notorious "paralysis whip," these Angels soon proved to be anything but merciful.

Cutting a swathe across the battlefields of Europe, routing Allied Mirage Tanks and Soviet Bullfrogs alike, the Rocket Angels quickly gained a reputation for ferocious tenacity, descending from the skies in a shower of light and destruction, rending the Emperor's enemies asunder, and achieving victory even when the odds seemed stacked against them. In time, it became clear to Prince Tatsu that few wished to stand against his devastating progeny, and those that unwisely chose to do would quickly perish—and so the Prince of the Rising Sun stood vindicated, his Rocket Angels an unparalleled success.

Being the flying shock troopers of the Empire of the Rising Sun, the Rocket Angels proved useful when defending the Black Tortoise, and later swept away what little remained of the Allies and the USSR. In Operation the Last Red Blossom Trembled, after a last-ditch superweapon attack by the remnant enemies, Emperor Yoshiro sent 2 Tengus, a King Oni and several Rocket Angels to destroy the FutureTech Lab.

In the Soviet and Allied Campaigns, the Rocket Angels were tough foes for even Kirovs and Century Bombers - but combined with both Commanders' strategies and directed firepower, they were but flying meat to the grinder.

During Yuriko's insurrection, Rocket Angels were reported to be among the interior guard units, along with the other units of the known Imperial Army. By the time of Yuriko's attempted jailbreak from Shiro Sanitarium, a squadron of Rocket Angels were instrumental in seizing Yuriko Matsui with their paralysis whips and returning the schoolgirl-turned-bioweapon to her cell. The moment she returned to Shiro Sanitarium, however, most of these flying femme fatales were brought down to the ground by Yuriko's psionic powers, while some succumbed to her mind control, obeying their psionic mistress' wishes as Yuriko's minions.

Battlefield reconnaissance has revealed at least these facts about the Rocket Angels:

• To the skies! -- Outfitted with the latest in asynchronous thruster technology, the Rocket Angel's high-tech flight suit, featuring the most advanced Imperial gyroscopic stabilization devices, allows these proud woman-warriors to traverse land, sea and air with the greatest of ease. They need never touch the ground during battle, and indeed, their doctrine strictly prohibits them from doing so.

• Rapid deployment -- The Rocket Angel flight suit is as fast as it is maneuverable, leading to the much quoted Allied battlefield truism "...the moment you see one of them Rocket Angels, you're already dead, you're just too stupid to realize it." Rocket Angels are vulnerable only to anti-air weapons, yet are more than capable of retaliating against such weapons.

• Fit to burst -- Capable of unleashing spiraling, whirling dervish of destruction, the Rocket Angel's twin photon swarm-rocket pods are deadly to both armored vehicles and heavily reinforced structures alike. Sustained Rocket Angel fire is of such intensity as to bring even the most imposing enemy fortress to the ground.

• Dominance and submission -- The Rocket Angels possess a second, significantly more insidious weapon—the paralysis whip. This flexible beam of high-intensity energy is wielded like a lash by its mistress, with any contact rendering its target completely disabled. The utility of this weapon is without question, although should the "beam" of the whip disengage from a target for any reason, the target can resume acting as normal. Furthermore, due the technical difficulties of acquiring a target lock on fast-moving aircraft, in addition to wind and debris concerns, the paralysis whip has only been calibrated for use against ground targets. 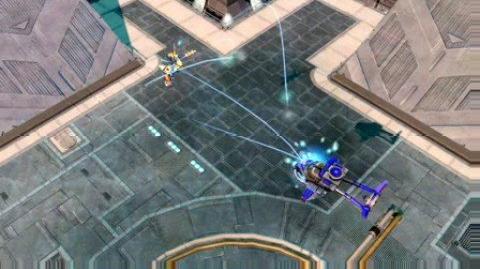 Retrieved from "https://cnc.fandom.com/wiki/Rocket_Angel?oldid=237242"
Community content is available under CC-BY-SA unless otherwise noted.