Rocketeers were Allied flying infantry utilized during the first and second iterations of the Third World War.

Equipped with a high powered jetpack and high-calibre semi-automatic carbine, these brave men can stay in the air almost indefinitely.

During the war, their first notable deployment was to assist Tanya in retaking the Air Force Academy in Colorado Springs from Soviet control.

Judging by their noticeable accent, they are likely recruited from the southern United States.

Rocketeers are a good choice for scouting due to their speed and low cost. They are most useful when massed, especially for taking down Kirov airships and enemy harvesters.

Rocketeers are one of only three infantry units that cannot enter the Infantry Fighting Vehicle, as they are constantly flying (the others being cosmonauts and brutes).

Rocketeers have high enough health to survive a few splash damage attacks, but point defenses like gatling weapons present a significant problem. Due to their inability to withstand sustained fire, are primarily used behind more durable units such as IFVs and Grizzly battle tanks.

Since they are an air unit, the rocketeer is completely immune to attacks to most ground troops, even with mind control. They can only be easily taken out by anti-air units such as IFVs, Flak tracks, Apocalypse tanks, and Aegis Cruisers.

It is worth noting that the Rocketeer was one of only a small group of air units capable of attacking other air units, along with the (campaign-exclusive) Cosmonaut, the Soviets' Siege chopper, and Yuri's Floating Disc, being an excellent counter to the latter when massed.

Groups of five or more rocketeers can usually overwhelm an IFV. Groups of nine or more are powerful against many ground targets.

Rocketeers are a decent defensive unit. If a player is attacking only with units that cannot target air units, groups of rocketeers are an effective counter. They are especially effective against Allied GIs and Soviet Conscripts as they cannot fight back.

The rocketeers can be seen grounded in Eagle Dawn and Mirage, as when placed on a map, they start out standing on their feet. When moved, they lift off. The only instance in standard gameplay where a rocketeer is seemingly observed walking is when a spy disguises as one.

They are not known to operate after the events of the Psychic Dominator Disaster. After Anatoly Cherdenko altered the timeline, these flying soldiers did not have an Allied-aligned equivalent during the War of the Three Powers, although the Empire of the Rising Sun developed a similar unit called the rocket angel, whose weapons are more effective against tanks and aircraft. 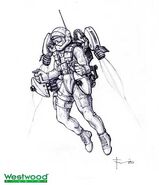 The idea of the rocketeers is probably taken from a superhero of the same name. The Rocketeer is a superhero which has been used in comics and a movie created in 1991.

Some similarities exist between the two:

Retrieved from "https://cnc.fandom.com/wiki/Rocketeer?oldid=245135"
Community content is available under CC-BY-SA unless otherwise noted.