The Salamander (designated Support Gunship 11) is one of the most technologically advanced creations of Kane's secret Project Omega, and was designed to mitigate GDI's air superiority. It was created with technology reverse-engineered from Scrin war machines by Abbot John W.E. Vladislav, the Chief Engineer of Project Omega, and entered service in 2075.

Roughly rectangular in shape, the Salamander is a combination of strategic bomber and gunship. Capable of flying on the edge of space, it has an extremely sturdy shell, coated in heat-resistant ceramic armor capable of withstanding both high altitude hazards and feedback from its weapon systems, underlaid with a mesh of ultra strong fibers wrapped around a rigid frame, based on reverse engineered Scrin materials.

For combat, it bears four Darter missile turrets, mounted on each corner for a full 360 degree anti-air coverage, and can also be used to suppress enemy ground forces. However, it's most feared weapon is the Purifier Incendiary Delivery System, which uses an advanced version of 20th century napalm. The Purifier is composed of tanks with compressed liquid Tiberium inside, which is expelled onto the ground when the command is given and ignited with a localized plasma stream, which continues to fire for a few moments. The resulting torrent of flame incinerates any and all units and structures in the affected area, and often has the effect of traumatizing enemy troops that survive.

It is crewed by a Captain in charge of six crewmen and four cybernetic missile turret gunners.

The Salamander is available at Tier 2 to Nod Support Commanders who have unlocked it. It is the hard counter to the GDI Orca Mk. V and Hurricane Fighter. It has Heavy-type armour, which gives it good protection against rockets and bullets. Lasers, however, (such as those of the Paladin, Striker, and Titan) will pierce the armour, causing serious damage.

The Salamander's special ability is Purification. This engages the Purifier Incendiary Delivery System which directs 3 successively bigger fire blasts towards the ground, dealing Blast damage to all units in the affected area. It is especially effective against clusters of structures and large groups of light vehicles and infantry.

The Salamander is too big to be constructed inside the Support Crawler. They normally cruise at high altitude, awaiting a request by a Nod Support Commander.

The Salamander's closest GDI equivalent is the Hammerhead.

An achievement can be earned if the player uses it to destroy several aircraft.

Paris invasion; Salamanders can be clearly seen in the skies 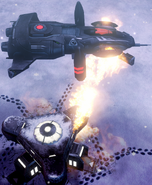 Salamander using it's Purification ability
Add an image to this gallery

Retrieved from "https://cnc.fandom.com/wiki/SG-11_Salamander?oldid=232357"
Community content is available under CC-BY-SA unless otherwise noted.