Mari Weiss
Sakura Obata was a mercenary-for-hire that appeared as the quaternary antagonist-turned-anti-heroine of Command & Conquer: Renegade.

A beautiful Japanese woman covered in tattoos with a quiet, brooding, intense personality, Sakura Obata to this day remains a mystery. She is also an accomplished martial artist, acrobat, and a master of stealth. Much of her past is shrouded in mystery, and it is quite propable that we will never know her true story. It is rumored that she was raised in the harsh, male dominated environment of the Japanese mob, the Yakuza, a brutal criminal organization where failure was not an option. She supposedly grew disenchanted with the Yakuza, and eventually began to seek other arenas for her considerable talents.

Sakura was hired by GDI to work with the Project: Shadow Strike unit, later known as the Dead 6 alongside then-captain Nick Parker. During one assignment, she was separated from her team and ambushed by Nod troopers. Since she was never heard from again, she was assumed dead.

Working for the Black Hand

However, it turned out she joined Nod, in part due to their ample bank accounts and in part because she was a double agent working, in the end, for GDI. She was hired by general Gideon Raveshaw as his personal mercenary, alongside Carlos Mendoza, who showed obvious interest in Sakura (despite his later attempt to kill her under the orders of Raveshaw), something Nick Parker (with whom she had an affair while in the Dead-6 unit) disapproved of greatly.

As a Black Hand member, she was part of the group that kidnapped and escorted GDI's top Tiberium specialists from Guatemala. When they were moved to a remote airbase in the Swiss Alps, Obata managed to corner Captain Parker in the hold of a C-130 Hercules airplane, after the captain missed Carlos Mendoza, a fellow mercenary. Kicked out of the plane by the GDI commando, she gave chase in a RAH-66 Comanche, eventually shooting down the cargo plane over a Nod controlled tropical island. She continued to stalk captain Parker with her gunship, but eventually was shot down and crashed into the island's geothermal plant, triggering a volcanic explosion. She did, however, manage to escape the wreckage before it was consumed by fire.

She returned to her employer and was tasked with protecting the scientists in the underground facility of a chateau the Black Hand relocated their command center to. There, she managed to ambush captain Parker once again, holding him up with a silenced pistol. When General Raveshaw entered the room, the commando tried to use Obata as a human shield, but the Nod general ordered his right hand man, Mendoza, to execute them both, Sakura for her incompetence. The mercenary's flamethrower triggered a catastrophic reaction in the research lab that in a matter of minutes brought the entire chateau down. Captain Parker lost Sakura in the initial execution attempt by Mendoza, who disappeared and would later return to the Black Hand. When Sydney Mobius and Nick Parker were apprehended later, Sakura would spring the GDI commando from the top level Nod prison facility he was held at and cover his escape. However, when trying to assassinate General Raveshaw, with whom she held a grudge against for trying to kill her, she was caught and imprisoned within the Nod tech center she'd found him at.

She managed to free herself and escape, shadowing Doctor Elena Petrova and her captive, Doctor Sydney Mobius all the way to the Temple of Nod in Cairo, providing intel to Captain Parker and her true employer, the Global Defense Initiative. After the First Tiberium War, Sakura Obata disappeared from the public eye, picking up the job of a mercenary once again. 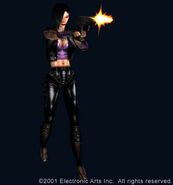 Ditto, but with text

Ditto, alter skin
Add an image to this gallery

She is played by Mari Weiss.

Retrieved from "https://cnc.fandom.com/wiki/Sakura_Obata?oldid=229930"
Community content is available under CC-BY-SA unless otherwise noted.