Salvage Operation is the fifth mission in the Nod campaign of Tiberian Sun.[1]

The alien craft is located in this region. FIND IT! The area is infested with GDI, so stealth would be to your advantage. Once the craft is located get an engineer inside to retrieve the Tacitus. And, should you encounter Vega's forces - consider them expendable.

Loss of the alien warship

﻿After Anton Slavik took back the Brotherhood's most holy ground in Sarajevo, Kane instructed Slavik and the Montauk crew to deliver an alien ship to him which containing the Tacitus. However when Nod forces arrived at the hanger, the ship was not there. Just then a desperate transmission from General Vega came through to the Montauk. Vega had tried to fly the ship to "settle an old score in South America" but, unable to control it, had simply crash-landed it west of Texas, right in the path of Michael McNeil's advancing GDI forces.

Though they quickly established a base in the vicinity and began to retrieve artifacts, General Vega's Nod forces had subsequently lost control of the crash site. They had then attempted to destroy the alien warship and keep it out of GDI hands but McNeil's forces were able to stop them.

Kane desired the Tacitus's recovery greatly and believed it to lie in the warship's interior. But the Alien warship now lay in GDI hands; deep within GDI territory. Prospects now looked bleak for Anton Slavik, who had been tasked with recovering the Tacitus.

Nod resurgence in the Americas

As GDI forces poured into Central America aiming to finally bring Nod leader General Vega to 'justice' and prepared to storm his island base in their haste they left many pockets of organised Nod resistance behind them. As the GDI moved against General Vega, those forces suddenly remerged and began to disrupt GDI control over much of the territory that Michael McNeil had helped them win.

With GDI forces suddenly disrupted, it had now became possible for Anton Slavik to press ahead with his mission. However General Vega was desperate to acquire the Tacitus for himself and improve his standing with Kane. But it was Anton Slavik that had been given the mission and besides, General Vega was on his last legs, his forces would give the Tacitus to him but the GDI would simply take it right off him.

Consequently CABAL advised Anton Slavik to carry out his mission independantly relying on stealth over brute force and to consider any of Vega's forces he might encounter expendable.

Instead, Slavik had to insert only a small team to escort his engineers to the crash site and to utilise stealth to avoid GDI patrols. The team was inserted at the edge of Hobbs and witnessed a bullet train go past. Having eliminated all the GDI sentries in the town that they did not avoid, Slavik's team followed the rail line and slipped past the patrolling Titans. Infantry patrols were harder to avoid.

In order to locate the crash site they may have used some of their engineers to gain control of a Radar station to the north, which would have given them the location of the crash site and also allowed them to conscript its staff into their forces as Light infantry.

They slipped past the GDI landing zone base and accessed the crashed alien ship, eliminating all the patrols that had caught them along the way. Once there an engineer took control of the ship, allowing them to begin the search for the Tacitus.

Meanwhile at the landing zone a GDI, MCV had arrived. Upon arrival it moved to establish a base above the crash site, hoping to deny Nod forces access to the crash site.

As soon as Anton Slavik's forces were discovered to be in control of the alien warship, the Titans that had been escorting the MCV enroute to establish the base turned their weapons on the crash ship, blasting it into inaccessable wreckage. Thus the Alien warship and the struggle of the GDI and Nod for control over it finally came to an end.

The engineer had gone inside the ship only to discover the Tacitus was nowhere to be found. The team also realised that Vega may be attempting to get the Tacitus out of the area via the bullet train to the north.

Actually the GDI had already destroyed the railway bridge leading out of the area to prevent him from doing that and until after General Vega's or Anton Slavik's forces had repaired the bridge, it would be impossible for Vega to have moved the Tacitus out of the area.

Anton Slavik's forces slew the handful of General Vega's infantry that they found in the vicinity of the train and began to destroy the train. They then began to search the wreckage just as they had searched the ship for signs of the Tacitus. 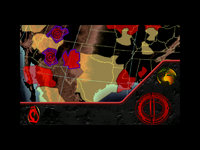 They could not find any sign of the Tacitus within the train's wreckage. As one of the surviving Nod soldiers from the strike force tried to report the fact to an angry and threatening Anton Slavik, the Forgotten leader Umagon struck him down and killed the man as he was making his report. CABAL was able to use its advanced computing ability to extrapolate Umagon's identity even though they did not see her clearly.

The Forgotten had ambushed Anton Slavik's forces in the area and it was now impossible for them to collaborate whether or not since they had completely wiped out the team that Anton Slavik had deployed.  The Tacitus had actually been removed from the ship by the Forgotten during Nod's return to the old Sarajevo Temple and this happened before General Vega had ever flown it to North America.

However Nod did not know that and consequently they believed that the Tacitus must have now be in the hands of Umagon. As a result Anton Slavik made it his highest priority to track down and capture Umagon, believing this would gain them the Tacitus.

General Vega was killed during the aftermath of the GDI assault on his base when Kane launched a nuclear missile, obliterating the island on which the base was located on, all GDI forces and of course General Vega himself.

Consequently his forces in North America fell directly into the hands of Anton Slavik who would now be able to use them to launch his own offensive on the GDI or the Forgotten and capture Umagon.

But Nod's recent string of victories had not gone unnoticed and Michael McNeil with the conclusion of the Central American campaign was now free to be assigned to the task of defeating Anton Slavik and bringing North America back under GDI control.