The Scalpel Is a Nod Support-class repair support aircraft appearing in Tiberian Twilight.

It is an unarmed air unit designed to repair other air units on the go, and therefore it is also rightfully fragile. Yet it is also an useful asset to any airfleet, due to the repair ability and support value. It can be upgraded with an Infusion Engine, Range Boost and Speed Boost.

The Scalpel is the Nod Support Class' main repair unit. Though all classes have access to Engineers, they can't repair Air Units. The Scalpel fills this necessary role.

Its additional mobility, debuff, and repair capacity up this unit's cost to 6 command points. The Scalpel can also be upgraded to increase the fire rate of allies in a small radius.

Though necessary to maintain large airfleets, the Scalpel has terrible armor and low maneuverability. A single rocket barrage from a Tier 2 Crawler will destroy a Scalpel, so micromanagement is necessary to preserve them. 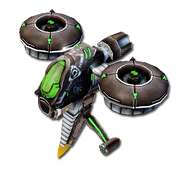 Retrieved from "https://cnc.fandom.com/wiki/Scalpel?oldid=230549"
Community content is available under CC-BY-SA unless otherwise noted.