The Scavengers were a a major faction that was to appear in Renegade 2.

Born from the ashes of the fallen Soviet Union, they are a scavenger culture, living off of ore they excavate and whatever leftover Soviet tech they can find. They form the basis from which the Brotherhood of Nod emerges.[1]

Their mission, goal or leader are not known, but naming Kane here is likely more right than wrong. However, it is known that most of their technology was Soviet based, often with makeshift repair and a junked look to it.

The Renegade 2 tech demo features their Scavenger refinery, which acts as a sort of junk cathedral.[2]

Concepts for the Scavengers' insignia

Concept for a Scavenger infantryman 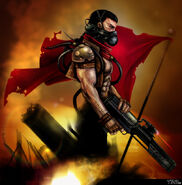 Another concept of a Soviet infantryman

Render, bridge leading to the refinery

Render of the emerging Hand of Nod.

Render, entrance
Add an image to this gallery

Retrieved from "https://cnc.fandom.com/wiki/Scavengers?oldid=241116"
Community content is available under CC-BY-SA unless otherwise noted.