The Scrin ship is a mysterious ship that was stored in a Nod hangar accessible from the Sarajevo Temple at the end of the First Tiberium War.

The ship was easily as large as a GDI carrier of the 2030s.[1] It is described as an alien ship by Kane and GDI scouts remarked that they didn't think humans built it.

The ship was of Nod design based off data from the Tacitus and was an attempt to mimic Scrin technology.[2] [3]

Kane refers to it as being constructed during the First Tiberium War, but he also describes it as an alien warship and the GDI scouts investigating its interior did not think that humans had built it.

Nod's apparent inability to employ similar designs to the warship that were based upon Scrin technology in the First Tiberium War, similar to the later Banshee employed in the Second Tiberium War, indicate that Nod simply lacked the required technology and industrial ability to create a functional Scrin ship from scratch at the time. However, it is clearly described as having been constructed rather than repaired or reconstructed.

The ship was in Nod hands at the end of the First Tiberium War. It was stored in an underground hangar near the Sarajevo Temple of Nod and abandoned when the GDI overran the area.[4] GDI examined the Sarajevo site, but did not discover the hangar. Excavations in progress during the early stages of the Second Tiberium War brought GDI uncomfortably close to discovering the ship.[5]

General Vega reached the ship first and; rather than returning it to Kane tried to fly it to South America to "settle an old score". However, Vega was unable to control the ship and crashed it in GDI's Sector 9 in the southern United States.[4] Umagon, a Forgotten, and GDI scouts discovered the ship.[1] GDI was initially aware of the mutant's presence and discovered the ship booby-trapped as part of a failed attempt to demolish the ship with buried C4 charges.[6] GDI Commander Michael McNeil moved quickly to secure the crash site.[1] Nod forces attacked in a bid to destroy the ship but were held off by McNeil. Umagon revealed herself after Nod was routed.[6] Nod had recovered technology from the ship prior to losing control and stored it at the nearby technology center.

The Nod search for the Tacitus

The ship stored the Tacitus when it was abandoned at the end of the First Tiberium War. Consequently when General Vega crashed the ship in the southern United States, Kane tasked Commander Slavik to recover the Tacitus before it could be removed from the ship by either Vega's forces or the GDI. The Tacitus was not found and the Nod search party that regained control of the ship was then ambushed and killed by the Forgotten.[7]

In reality, the Forgotten had removed the Tacitus from the ship before Vega tried to fly it to South America. Ironically, the search for the fugitive Umagon led Nod to the Forgotten base where the Tacitus was actually held.

The ship was finally destroyed by GDI forces after Nod briefly regained control of the ship as part of their search for the Tacitus. What advances were in the end made based upon its technology is unknown. 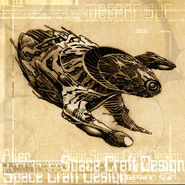 Retrieved from "https://cnc.fandom.com/wiki/Scrin_ship?oldid=210293"
Community content is available under CC-BY-SA unless otherwise noted.