The searchlight towers (called spotlight towers in the Tiberian Sun game data) were a common, simple structure designed as an outpost and a watchtower. This design originated in the Second Tiberium War, and was essentially an elevated, enclosed platform with searchlights on a concrete base. Its primary role was the surveillance of a given area and alarming the base of any incursions; if an enemy unit goes near a searchlight tower, it will lock its spotlight on this unit, following its movements and marking it.

It also doubled as a garrisonable building in the Third Tiberium War around some abandoned GDI bases and the Pentagon. 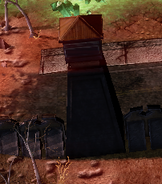 in snow theater
Add an image to this gallery
Retrieved from "https://cnc.fandom.com/wiki/Searchlight_tower?oldid=226915"
Community content is available under CC-BY-SA unless otherwise noted.