The service depot was a support structure used by the Allied and Soviet armies during the first and second iterations of the Third World War, with the purpose of repairing vehicles and certain aircraft.

The purpose-built facility repaired friendly ground vehicles at a cost (proportional to the vehicle's damage) and remove terror drones. A service depot was also required to construct an MCV.

The service depot was considerably more important to the Soviets than the Allies. In the absence of a Tech Outpost or Tech Machine Shop, it was the only way Soviet battlefield commanders could repair vehicles (unless the vehicles were self-repairing, such as elite units and Apocalypse tanks). The Allies could use an IFV with an engineer inside it to repair their ground units and remove terror drones at no extra cost to the commander.

By the third iteration of the war, Allied War Factories came equipped with repair drones, negating the need for service depots, while Soviets used the crusher crane. 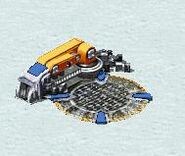 Alpha icon
Add an image to this gallery

Retrieved from "https://cnc.fandom.com/wiki/Service_depot_(Red_Alert_2)?oldid=237662"
Community content is available under CC-BY-SA unless otherwise noted.